Part of the massive challenges facing our brittle financial system is the opaque and secretive nature of the Federal Reserve.  It is difficult enough to confront a challenge with all information present but make it purposely convoluted and dark and we have a crisis of historical proportions.  The recent market volatility is simply a dire reflection of a system unsure of what is going on.  Markets despise distrust and that is what we are finding.  A few years ago we were told that the banking system was fine yet we now have data showing over $1.2 trillion in emergency loans were made to countless too big to fail banks.  In other words we were being lied to by both the Federal Reserve and the giant banks that largely created and spread this financial crisis like wildfire.  As more information leaks out we are starting to get a grim picture of how the Federal Reserve assisted and is assisting banks not only to hide residential real estate loans but also toxic commercial real estate debt.  Over $3 trillion in commercial real estate (CRE) values has evaporated since the crisis took hold yet banks continue to tell the public all is well while shifting these toxic bets onto the taxpayer balance sheet.

The collapse in CRE values 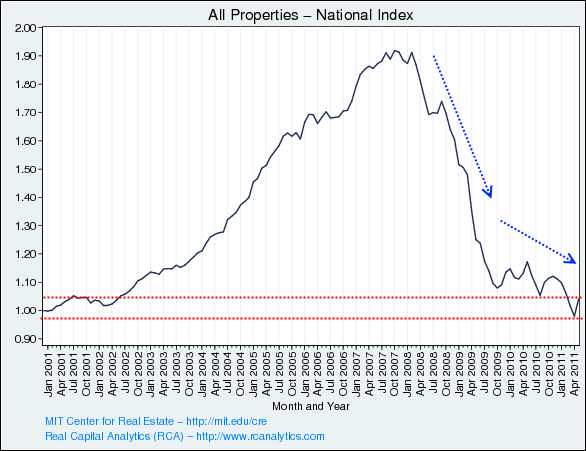 CRE values have already experienced a lost decade and are likely to remain depressed for years to come.  Many of these properties were developed with lofty aspirations and with future growth in mind yet an economy that is contracting has little use for more commercial space.  It is also the case that many of these CRE projects were designed for high flying easy money days.  Take for example some of the condo mix projects in Las Vegas.  Many now sit empty when they were once envisioned as selling for millions of dollars to high rolling aficionados.  Those days simply did not materialize because austerity is taking hold across the world because the debt bubble has burst.  The chart above is data collected monthly by MIT on CRE values.  It is rather obvious that the trajectory of CRE values has imploded since the crisis hit.  Yet somehow the Federal Reserve is openly shifting CRE debt onto its trillion dollar balance sheet even though it knows these are failed projects.  Why?  To aid and protect the banks it serves, not the nation’s economic wellbeing.

More problems ahead for CMBS 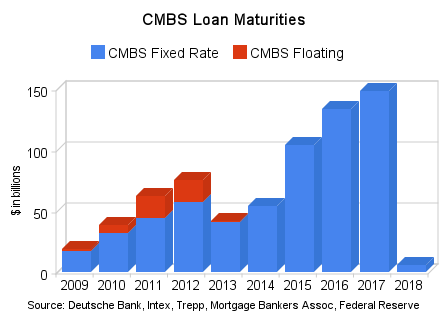 Many of the loans in the CRE market are bundled in CMBS similar to RMBS (residential mortgage backed securities).  As the chart above clearly highlights many of these will hit maturities in the years to come.  The problem then stands as who will take on the loans?  At the moment banks have been silently shifting these bad loans onto the Federal Reserve balance sheet for liquid assets.  This kind of behavior slowly but surely crushes the U.S. dollar as we comingle our safer investments with the toxic waste of the banking industry.  This can only go on for so long and the fact that the Fed balance sheet is still near a peak level above $2.8 trillion tells you that there are no sane buyers in the market for this waste.  All of this of course is kept in the shadows from the public.

After the housing burst then comes the CRE bust

Many of the CRE projects were built with the idea that perma-growth in residential real estate would be unlimited.  Think of the cookie cutter malls and office parks built around towns in places like Arizona that overestimated population growth by leaps and bounds.  These CRE projects take years to complete and were likely started at the height of the mania only to come online with no one in the market as a buyer or anyone else that would want to lease the units out.  This is the dilemma.  Unlike a home, there is likely a bottom price, many of these CRE properties have very little value.  The chart above shows this common pattern when CRE bubbles burst.  So with $3 trillion in CRE values evaporating since 2008, why is the Federal Reserve not publicly talking about this? 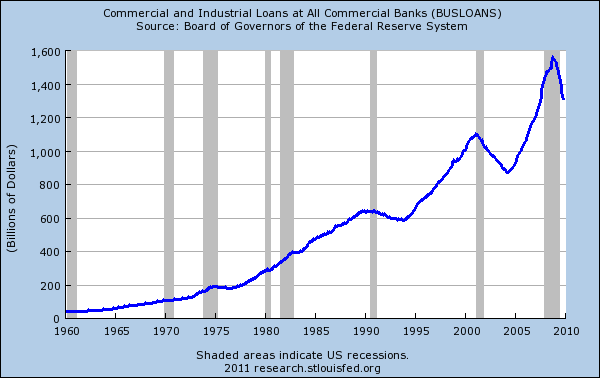 Banks might put on a happy face and say all is well in their balance sheet.  But just as we have found out with clear data the Fed was actively bailing out the banks behind closed doors while they openly conveyed to the public that all was well.  If all was well why in the world did they take on $1.2 trillion in emergency loans at the height of the crisis?

The fact that banks are lending less and borrowing from the Fed is simply a reflection to the financial balance sheet issues still being faced by the largest banks in the country.  The fact that these banks can use the Federal Reserve as some sophisticated way of laundering money into the nation’s financial bloodstream is troubling to say the least.  The data presented recently shows us and confirms exactly what many have believed for years and that is the Federal Reserve has been clandestinely bailing out the entire banking system and problems were not only systemic, but the entire system was polluted with bad loans and deception.  So with this data at hand, why would we trust the system that openly lied to the public at the peak of the crisis?