Footage of NATO planes destroying Libyan tanks has been released by the Ministry of Defence as the African Union intervenes in the crisis to mediate in a bid to prevent further bloodshed.

In a meeting between five African heads of State and Libyan representatives, the Union has agreed to act as mediators for any peace talks that take place between the government and the rebels.

The head of the Union, Jean Ping, said the talks were an attempt to 'foster an exchange of views in order to take action on the situation in Libya and to seek the ways and means towards a swift solution to the crisis'.

Scroll down for video of Military briefing 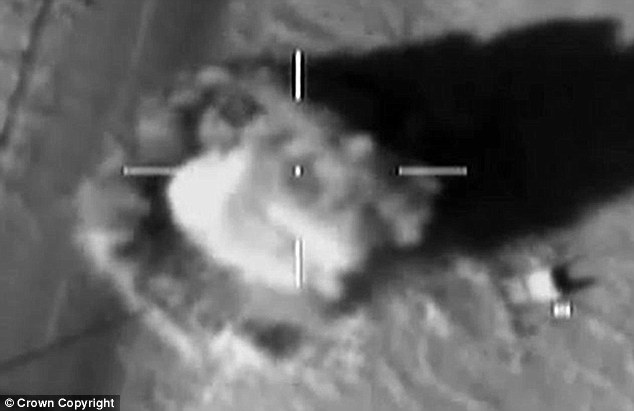 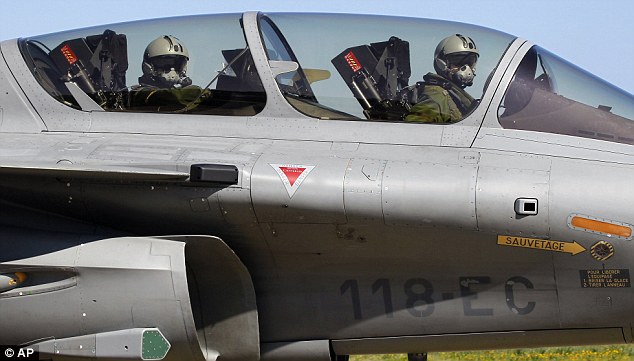 Hot shots: French Air Force pilots in a Rafale jet fighter return to base on Corsica after flying a mission to Libya 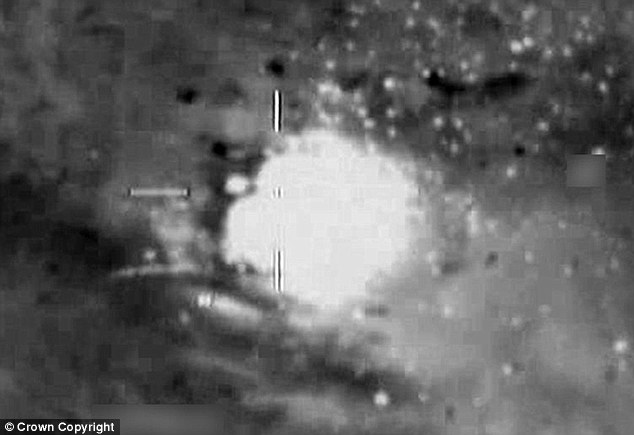 Earlier today the Ministry of Defence released footage of tanks being bombed by RAF Tornado jets. 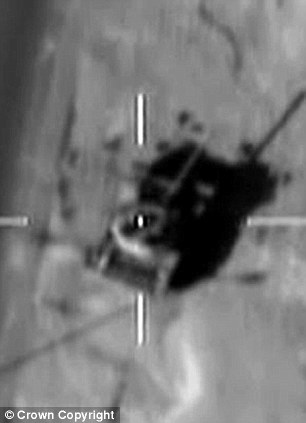 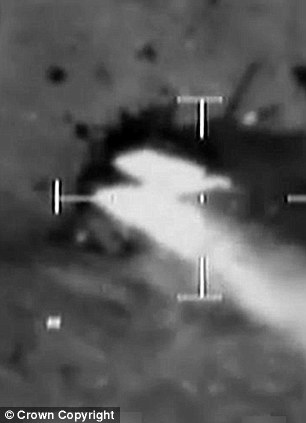 Before and after: Three Libyan tanks were taken out after Brimstone missile strike

An RAF Tornado warplane, similar to the one that bombed Libyan tanks

'They also had intelligence on likely target locations from previous RAPTOR [Reconnaissance Airborne Pod for Tornado] images, and using this they were able to identify a group of Libyan T-72 tanks, with their weapons trained on Adjabiya. Their highly accurate attack with Brimstone missiles hit three of the tanks, completely destroying them.

'The Tornados were by this time running low on fuel, so they handed the target over to another coalition patrol, which then attacked with laser guided bombs and hit another three tanks. Having refuelled from an Royal Air Force VC10 tanker aircraft, the GR4s then returned to assess the results of the combined attacks.

'They then identified another tank, still threatening innocent civilians, and successfully attacked it with Brimstone missiles.'

After command of the international no-fly zone was handed to Nato Foreign Secretary William Hague said he expected the rest of the military operation to follow.

'I have every expectation that the whole operation, including the protection of civilians on the ground in Libya by our air strikes and missile strikes, will also be part of a Nato command,' he told BBC Radio 4's The World at One. 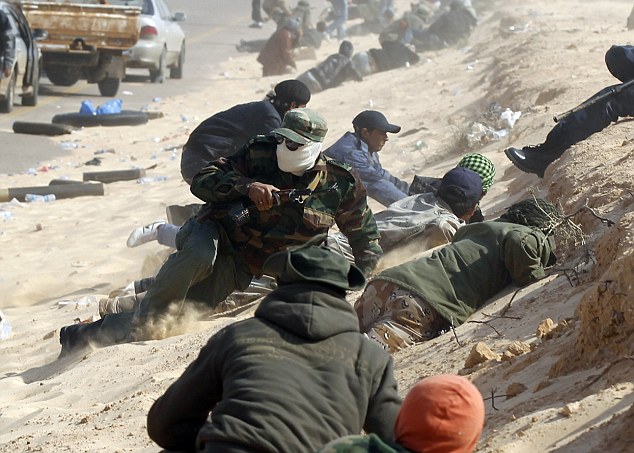 Mr Ping, speaking at talks in Ethiopian capital Addis Ababa, is now calling for a transition period in Libya that would lead to democratic elections.

In a speech, he stressed the inevitability of political reforms in Libya, and said that he believes a consensus can be reached between the rebels fighting against the regime of Colonel Gaddafi.

Meanwhile, David Cameron praised the bravery of UK military forces in action over Libya today as he insisted the campaign would continue until civilians were 'safe and secure from attack'.

The Prime Minister said the coalition had been right to act 'quickly and decisively', but the situation remained 'grave' in Misrata and Zintan.

British forces had now carried out 70 sorties against Muammar Gaddafi's troops, including striking at tanks on the ground, he said.

'I want to thank all of those involved for their incredible skill and bravery,' Mr Cameron told journalists in Brussels. 'The situation of civilians in Misrata and Zintan is grave. But we have moved quickly and decisively over the last week and I think it was right to do so.'

Mr Cameron said the EU summit had agreed that 'military action should continue until people are safe and secure and until UN Security Council Resolution 1973 is properly implemented'. 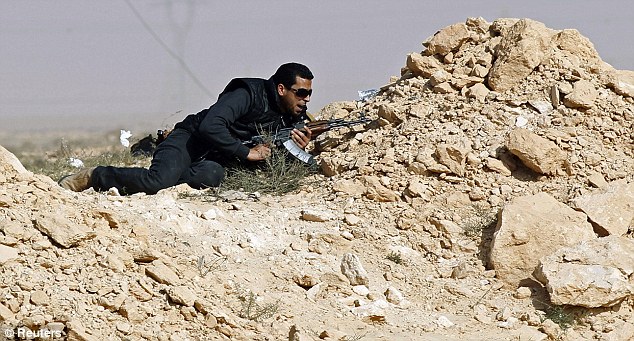 Ready and waiting: A prone rebel crawls through the stony ground carrying his AK-47 weapon

Mr Ping, speaking at talks in Ethiopian capital Addis Ababa, is now calling for a transition period in Libya that would lead to democratic elections.

In a speech, he stressed the inevitability of political reforms in Libya, and said that he believes a consensus can be reached between the rebels fighting against the regime of Colonel Gaddafi.

Meanwhile, David Cameron praised the bravery of UK military forces in action over Libya today as he insisted the campaign would continue until civilians were 'safe and secure from attack'.

The Prime Minister said the coalition had been right to act 'quickly and decisively', but the situation remained 'grave' in Misrata and Zintan.

British forces had now carried out 70 sorties against Muammar Gaddafi's troops, including striking at tanks on the ground, he said.

'The people who are around him and are obeying his orders should realise that that time is up.'

His words came following a sixth night of bombing raids on the country.

British warplanes were again involved with raids over Tripoli, targeting military bases on the outskirts of the city.

Reports by the AFP news agency said that at least three explosions hit the city, with one heard in Tajoura, where the bases are located. 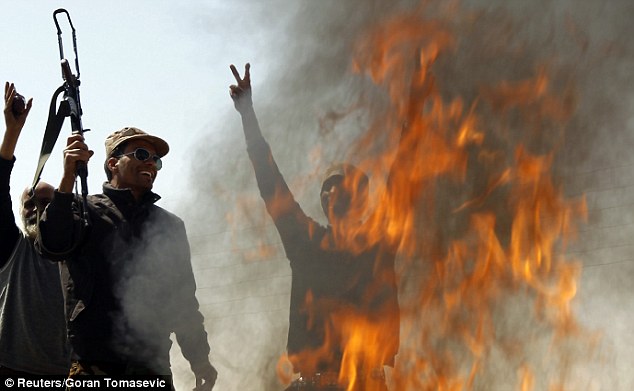 Up in flames: Rebel fighters close to Benghazi shout and cheer as they burn the clothes of soldiers loyal to Gaddafi 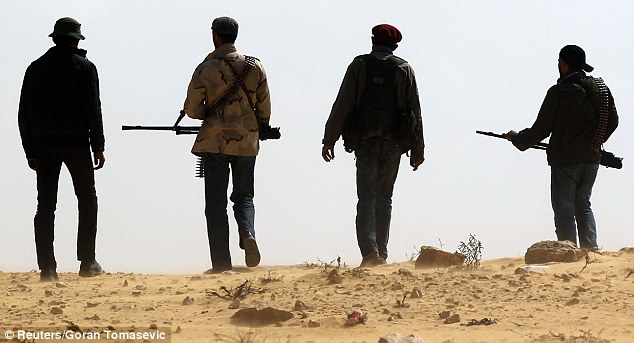 The Ministry of Defence also confirmed that they had attacked armoured vehicles in the town of Ajdabiya around 430miles south of the capital.

'The Tornado aircraft launched a number of guided Brimstone missiles at Libyan armoured vehicles which were threatening the civilian population of Ajdabiya. Brimstone is a high precision, low collateral damage weapon optimised against demanding and mobile targets.'

French aircraft were also involved in the attacks with the French Army's chief of staff, Admiral Edouard Guillaud, saying his forces had destroyed an artillery battery.

'Libyan airspace is under control, and we proved it yesterday, because a Libyan plane in the hands of pro-Gaddafi forces, which had just taken off from Misrata in order to bomb Misrata, was destroyed by a French Rafale,' Guillaud said on a French radio broadcast.

The bombing of the country came as it was revealed that hundreds of British special forces troops have been deployed deep inside Libya targeting Colonel Gaddafi’s forces – and more are on standby.

While Chancellor George Osborne repeated that UK ground troops would not be involved, the Daily Mail can reveal there are an estimated 350 already mounting covert operations.

In total it is understood that just under 250 UK special forces soldiers and their support have been in Libya since before the launch of air strikes to enforce the no-fly zone against Gaddafi’s forces.

The troops in Libya were drawn from a squadron of SAS and SBS personnel, some who have been in the country for a month and are being re-supplied with water, food and ammunition via airdrops from Cyprus.

Those numbers were further boosted by nearly 100 this week when paratroopers from the Special Forces Support Group (SFSG) were sent to Libya as coalition commanders prepare to increase the tempo of operations.

A further 800 Royal Marines are on five days’ notice to deploy to the Mediterranean to support humanitarian relief and aid operations. 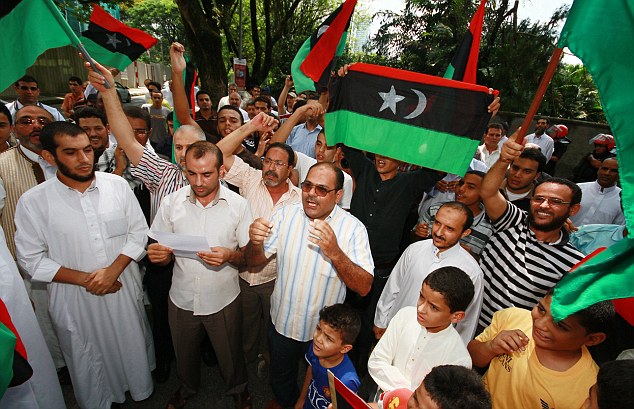 Rally: Libyan protesters chant slogans and hold the flag of the former Kingdom of Libya, the banned pre-Gaddafi flag that has been used by opposition supporters

But with Gaddafi forces continuing to pound rebel positions, more special forces will be needed in the next phase of operations to ensure that RAF pilots do not kill civilians used as human shields by Gaddafi or destroy key public buildings.

Officials say the UK force is under very clear directions not to get drawn into close combat operations with regime forces unless their own lives are threatened or in extreme circumstances in which Gaddafi forces are killing unarmed civilians.

A senior official said: ‘Our aim is maintain a low profile, and simply deliver information and facilitate the situation for other agencies to splash (destroy) the targets.’

UN General Secretary Ban Ki-Moon told the BBC that removing Gaddafi was not the sole aim of the operation but that it could be one effect.

In an interview Mr Ban said: 'In the course of this implementing the  Security Council resolution by enforcing a no-fly zone, and by taking military action, this may create a certain atmosphere politically, where Libyan people may discuss about their own future, including leader.'

And he said that the intervention had had the desired effect.

'It has deterred further aggression of military campaign by Libyan authorities and it was able to protect the civilians in Benghazi and some other areas. But we'll have to see. I believe that the superiority of the military power will prevail.'

Thank-you! An anti Gaddafi protester holds up a placard today showing his support for the UN Security Council's action against the tyrant 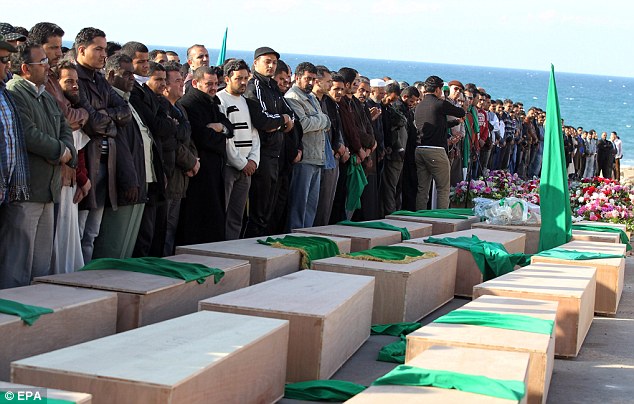 In mourning: Hundreds of Libyans stand in prayer at the funerals of people who have, according to Libyan authorities, died following the air strikes

Revelations about the true scale of the ground deployment cast grave doubt on the Government’s estimate of the cost of the war.

Mr Osborne yesterday sought to allay public fears, saying: ‘Our estimate is that it will be in the tens of millions of pounds in terms of the cost.’

But Daily Mail calculations show that the MoD has spent at least £29.2million in just five days on the air operations and cruise missile strikes – not including the costs of the Special Forces deployed in Libya.

At that rate the war will cost more than £100million after just 17 days. 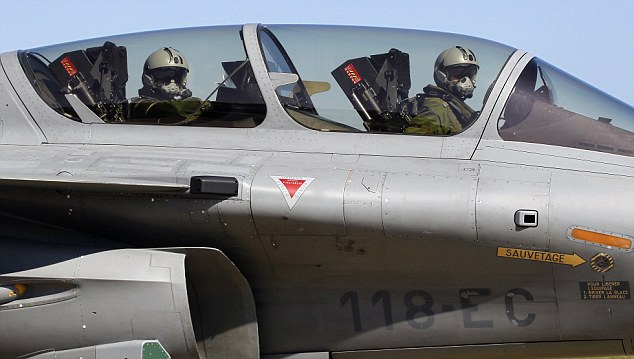 Yesterday a French fighter jet blasted a Libyan warplane caught violating the no-fly zone. The plane – said to be a single-engine Soko G-2 Galeb trainer aircraft – was hit by an air-to-ground missile as it landed at Misrata air base after flying over the besieged rebel-held city.

The strike by a coalition Rafale fighter is the first incident of its kind since the no-fly zone was imposed last week. Coalition military sources had previously claimed Libya’s air capability had been totally neutralised.

More than 100 people have been killed and 1,300 injured in Misrata following days of tank bombardment and sniper attack by the tyrant’s army.