Global Non-Compliance website > ATO's Terror Over Tripoli: NATO slowly admits what the Libyan government has said all along.

ATO's Terror Over Tripoli: NATO slowly admits what the Libyan government has said all along.

The NATO excursion into Libya started with disingenuous humanitarian concerns translated into a no-fly zone, which incrementally transitioned into attacks on Qaddafi's ground forces, targeted assassinations against Qaddafi himself, then talk of destroying civilian infrastructure and a full-out ground invasion. NATO declared mid-May that it would be "increasing the range of targets" it could hit, including "government infrastructure." With a residential area hit and NATO playing dumb over its role in murdering the very civilians it is supposedly protecting, it appears they made good on their promise. 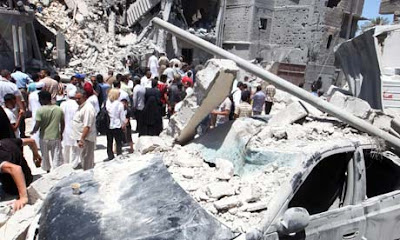 One must wonder if "R2P" holds true, who will round up NATO and send them to the Hague? ICC's failure to act further undermines its already nonexistent legitimacy.
....

The key to Qaddafi's long reign, his survival and resistance in the face of NATO's relentless attacks is the support he garners from his own people. While the mainstream media preys on the ignorance of its audience, those who took the time to examine the demographics of Libya would realize the current fighting is split along traditional tribal lines where animosity has existed, and in fact been funded and fostered by the West for at least three decades. With NATO incapable of handing their inept terrorist stooges on the ground the country with airstrikes alone, it appears they are attempting the same terroristic "shock and awe" tactics used against Iraq to break the will of the population with overwhelming violence.

Reports of civilian casualties owed to NATO strikes have been filtering out for weeks. Commonsense dictates the impossibility of dropping high explosive ordnance in the middle of a densely populated city without incurring considerable "collateral damage." However the corporate-owned media dismissed Libyan accounts of such murder and mayhem with a complete whitewash of NATO's terror over Tripoli. A ridiculous AP story titled, "Libyan regime accused of exaggerating casualties," claims that doctors dropped secret notes for reporters to read claiming many of the deaths the government was reporting were from road accidents rather than NATO admitted bombardment of the nation's populous capital city.

Just before NATO itself had to admit it did indeed drop ordnance in a residential area, media outlets, who have built the entire case against Libya with unverified reports from less than objective sources (the rebels), attempted to downplay the "alleged" claims of the Libyan government. Slate made sure in a recent article to remind readers that, "the Libyan government’s claims of civilian casualties have been exaggerated in the past." We must assume a doctor dropped Slate a secret note as well, for Slate makes no attempt to verify their assertion.

It has been previously noted how much is riding on the war against Libya. The very credibility of the the emerging international order and the primacy of international law is at stake, so says the corporate-funded Brookings Institution in their February report, "Libya's Test of the New International Order."Any and all methods to depose Qaddafi and hand the nation over to their globalist stooges will be attempted with the prospect of full-scale invasion a very real possibility. Failure for the global-elite would put an end to their gambits world-wide, signaling to struggling sovereign nations that resistance is not futile.

In many ways, though, NATO's Libyan excursion is already an absolute failure; a failure to garner wide support for the operation even amongst other NATO countries, a failure to sell the war to the public, and a failure to maintain a moral high ground they never possessed in the first place but in the lofty imaginations of their corporate-owned media networks. The clock is ticking and so the terror over Tripoli will only intensify. The global-elite and think tanks like the Brookings Institution are still selling the "R2P" or "responsibility to protect" doctrine as their reason for meddling in Libya. Not only is this confounding considering the violence they are supposedly attempting to mediate and stop was in fact started by them over the course of 30 years in the first place, it is also confounding when considering they themselves are now butchering Libya's civilian population.