Dismissing rioters as mindless is futile rhetoric. However unacceptable the UK riots, we need to ask why they are happening 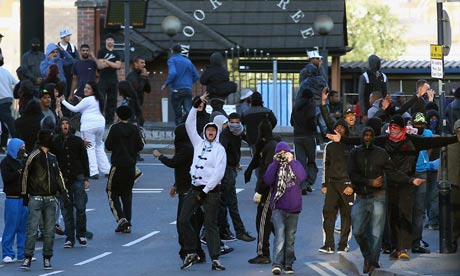 I no longer live in London. I've been transplanted to Los Angeles by a combination of love and money; such good fortune and opportunity, in both cases, you might think disqualify me from commenting on matters in my homeland. Even the results of Britain's Got Ice-Factor may lay prettily glistening beyond my remit now that I am self-banished.

To be honest when I lived in England I didn't really care too much for the fabricated theatrics of reality TV. Except when I worked for Big Brother, then it was my job to slosh about in the amplified trivia of the housemates/inmates. Sometimes it was actually quite bloody interesting. Particularly the year that Nadia won. She was the Portuguese transsexual. Remember? No? Well, that's the nature of the medium; as it whizzes past the eyes it seems very relevant but the malady of reality TV stars is that their shelf life expires, like dog years, by the power of seven. To me it seems as if Nadia's triumph took place during the silver jubilee, we had a street party.

Early in that series there was an incident of excitement and high tension. The testosteronal, alpha figures of the house – a Scot called Jason and a Londoner called Victor – incited by the teasing conditions and a camp lad called Marco (wow, it's all coming back) kicked off in the house, smashed some crockery and a few doors. Police were called, tapes were edited and the carnival rolled on. When I was warned to be discreet on-air about the extent of the violence, I quoted a British first-world-war general who, reflecting on the inability of his returning troops to adapt to civilian life, said: "You cannot rouse the animal in man then expect it to be put aside at a moment's notice."

"Yeah, that's exactly the kind of thing we want you to say the opposite of," said the channel's representative.

This week's riots are sad and frightening and, if I have by virtue of my temporary displacement forgone the right to speak about the behaviour of my countrymen, then this is gonna be irksome. I mean even David Cameron came back from his holiday. Eventually. The Tuscan truffles lost their succulence when the breaking glass became too loud to ignore. Then dopey ol' Boris came cycling back into the London clutter with his spun gold hair and his spun shit logic as it became apparent that the holiday was over.

In fact, it isn't my absence from the territory of London that bothers me; it's my absence from the economic class that is being affected that itches in my gut because, as I looked at the online incident maps, the boroughs that were suffering all, for me, had some resonance. I've lived in Dalston, Hackney, Elephant, Camden and Bethnal Green. I grew up round Dagenham and Romford and, whilst I could never claim to be from the demographic most obviously affected, I feel guilty that I'm not there now.

I feel proud to be English, proud to be a Londoner (all right, an Essex boy), never more so than since being in exile, and I naturally began to wonder what would make young people destroy their communities.

I have spoken to mates in London and Manchester and they sound genuinely frightened and hopeless, and the details of their stories place this outbreak beyond the realms of any political idealism or rationalisation. But I can't, from my ivory tower in the Hollywood Hills, compete with the understandable yet futile rhetoric, describing the rioters as mindless. Nor do I want to dwell on the sadness of our beautiful cities being tarnished and people's shops and livelihoods, sometimes generations old, being immolated. The tragic and inevitable deaths ought to be left for eulogies and grieving. Tariq Jahan has spoken so eloquently from his position of painful proximity, with such compassion, that nearly all else is redundant.

The only question I can legitimately ask is: why is this happening? Mark Duggan's death has been badly handled but no one is contesting that is a reason for these conflagrations beyond the initial flash of activity in Tottenham. I've heard Theresa May and the Old Etonians whose hols have been curtailed (many would say they're the real victims) saying the behaviour is "unjustifiable" and "unacceptable". Wow! Thanks guys! What a wonderful use of the planet's fast-depleting oxygen resources. Now that's been dealt with can we move on to more taxing matters such as whether or not Jack The Ripper was a ladies' man. And what the hell do bears get up to in those woods?

However "unacceptable" and "unjustifiable" it might be, it has happened so we better accept it and, whilst we can't justify it, we should kick around a few neurons and work out why so many people feel utterly disconnected from the cities they live in.

Unless on the news tomorrow it's revealed that there's been a freaky "criminal creating" chemical leak in London and Manchester and Liverpool and Birmingham that's causing young people to spontaneously and simultaneously violate their environments – in which case we can park the ol' brainboxes, stop worrying and get on with the football season, but I suspect there hasn't – we have, as human beings, got a few things to consider together.

I should here admit that I have been arrested for criminal damage for my part in anti-capitalist protest earlier in this decade. I often attended protests and then, in my early 20s, and on drugs, I enjoyed it when the protests lost direction and became chaotic, hostile even. I was intrigued by the anarchist "Black bloc", hooded and masked, as, in retrospect, was their agenda, but was more viscerally affected by the football "casuals" who'd turn up because the veneer of the protest's idealistic objective gave them the perfect opportunity to wreck stuff and have a row with the Old Bill.

That was never my cup of tea though. For one thing, policemen are generally pretty good fighters and second, it registered that the accent they shouted at me with was closer to my own than that of some of those singing about the red flag making the wall of plastic shields between us seem thinner.

I found those protests exciting, yes, because I was young and a bit of a twerp but also, I suppose, because there was a void in me. A lack of direction, a sense that I was not invested in the dominant culture, that government existed not to look after the interests of the people it was elected to represent but the big businesses that they were in bed with.

I felt that, and I had a mum who loved me, a dad who told me that nothing was beyond my reach, an education, a grant from Essex council (to train as an actor of all things!!!) and several charities that gave me money for maintenance. I shudder to think how disenfranchised I would have felt if I had been deprived of that long list of privileges.

That state of deprivation though is, of course, the condition that many of those rioting endure as their unbending reality. No education, a weakened family unit, no money and no way of getting any. JD Sports is probably easier to desecrate if you can't afford what's in there and the few poorly paid jobs there are taken. Amidst the bleakness of this social landscape, squinting all the while in the glare of a culture that radiates ultraviolet consumerism and infrared celebrity. That daily, hourly, incessantly enforces the egregious, deceitful message that you are what you wear, what you drive, what you watch and what you watch it on, in livid, neon pixels. The only light in their lives comes from these luminous corporate messages. No wonder they have their fucking hoods up.

I remember Cameron saying "hug a hoodie" but I haven't seen him doing it. Why would he? Hoodies don't vote, they've realised it's pointless, that whoever gets elected will just be a different shade of the "we don't give a toss about you" party.

Politicians don't represent the interests of people who don't vote. They barely care about the people who do vote. They look after the corporations who get them elected. Cameron only spoke out against News International when it became evident to us, US, the people, not to him (like Rose West, "He must've known") that the newspapers Murdoch controlled were happy to desecrate the dead in the pursuit of another exploitative, distracting story.

Why am I surprised that these young people behave destructively, "mindlessly", motivated only by self-interest? How should we describe the actions of the city bankers who brought our economy to its knees in 2010? Altruistic? Mindful? Kind? But then again, they do wear suits, so they deserve to be bailed out, perhaps that's why not one of them has been imprisoned. And they got away with a lot more than a few fucking pairs of trainers.

These young people have no sense of community because they haven't been given one. They have no stake in society because Cameron's mentor Margaret Thatcher told us there's no such thing.

As you have by now surely noticed, I don't know enough about politics to ponder a solution and my hands are sticky with blood money from representing corporate interests through film, television and commercials, venerating, through my endorsements and celebrity, products and a lifestyle that contributes to the alienation of an increasingly dissatisfied underclass. But I know, as we all intuitively know, the solution is all around us and it isn't political, it is spiritual. Gandhi said: "Be the change you want to see in the world."

In this simple sentiment we can find hope, as we can in the efforts of those cleaning up the debris and ash in bonhomous, broom-wielding posses. If we want to live in a society where people feel included, we must include them, where they feel represented, we must represent them and where they feel love and compassion for their communities then we, the members of that community, must find love and compassion for them.

As we sweep away the mistakes made in the selfish, nocturnal darkness we must ensure that, amidst the broken glass and sadness, we don't sweep away the youth lost amongst the shards in the shadows cast by the new dawn.

Russell Brand is donating his fee for this article to a clean-up project.