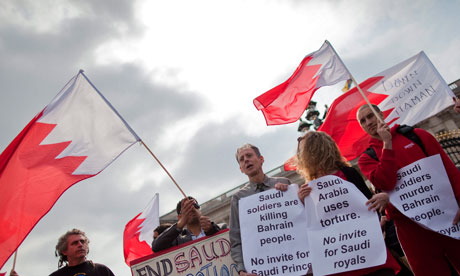 Protesters outside Buckingham Palace on Thursday. The next day, others say they were arrested or held to avert trouble. Photograph: Ian Langsdon/EPA

Activists have condemned a series of "pre-crime" arrests carried out by the Metropolitan police on the eve of the royal wedding as disturbing, Orwellian and of doubtful legality.

Republican activists planning events almost a mile away from Westminster Abbey were held for up to 24 hours in police cells around the capital on Friday as tens of thousands turned out to watch the celebrations.

Those arrested include 30-year-old stunt film-maker Charlie Veitch, who is part of the group Love Police.

He was arrested at his home in Cambridge at 5pm on Thursday on the charge of "conspiracy to cause a public nuisance" and on suspicion of involvement in last month's UK Uncut protest inside luxury retailer Fortnum and Mason.

Chris Knight, a 68-year-old retired anthropology professor, his partner, Camilla Power and 45-year-old friend Patrick Macroidan were arrested on the eve of the wedding near their home in Brockley, south-east London, on the same charge.

It is understood that Knight's group, the Government of the Dead, was planning to behead an effigy of Prince Andrew with a theatrical guillotine in an act of street theatre on Soho Square in London. Plain clothes officers carried out "snatch and grab" arrests of activists on the square on Friday morning.

Speaking after his release, Veitch said he had been planning to take his megaphone to Soho Square to protest about wedding expenditure in a time of austerity and had informed the Met about his actions in advance.

Although described as a political anarchist, Veitch said he was not a "destructive or violent" person and believes that his arrest was sanctioned from high up in the Met.

"I spent 16 hours in Parkside police station [in Cambridge] in a box-like cell. Then at 10am the next day, the Met police came to Cambridge and took me to Edmonton police station.

"They never made anyone aware of where I was. To my family, it was like I had been disappeared for the entire duration of the royal wedding."

Veitch described the grounds for arrest as "Orwellian" and compared it to the film Minority Report, where people were arrested before they committed a crime.

"I feel I was subject to a Minority Report style arrest, where I was being done for 'pre-crime'. Along with the other arrests, this was like the great royal wedding purge of the masses, sent to the gulags to keep them out of the way," he said.

Adam Moniz, 30, said he was detained for six hours in Belgravia police station after stepping off his train from Southampton on Friday morning.

Moniz, who says he is not a member of any political group and has never been arrested before, said that British Transport police questioned him on his train as it pulled out of Clapham Junction about a concealed banner he was carrying which read "Democracy not Monarchy".

Moniz told an officer that he was planning to attend the Not the Royal Wedding party, in Red Lion Square, Holborn and even offered to turn back to Southampton.

He was told to continue with his journey but was detained by 10 officers when he arrived at Victoria station.

"I like the [royal] couple and I'm happy for them; I was planning to protest against privilege. Instead I was held in a cell ... and released without charge after the wedding was over.

"I think what it said on my banner had some truth to it, and I think it was pretty outrageous to arrest me."

Solicitor Mike Schwarz, author of The Law of Public Order and Protest, said the arrests were part of a "growing trend".

"The police's tactics are of deep concern to anyone interested in the right to protest and dissent. Pre-emptive action by the police is a growing trend and of doubtful legality," said Schwarz.

"It fits in with the pattern of increasing reliance on kettling and the excessive use of force at the protests such as those at the G20."