C.I.A. Demands Cuts in Book About 9/11 and Terror Fight

WASHINGTON — In what amounts to a fight over who gets to write the history of the Sept. 11 attacks and their aftermath, the Central Intelligence Agency is demanding extensive cuts from the memoir of a former F.B.I. agent who spent years near the center of the battle against Al Qaeda. 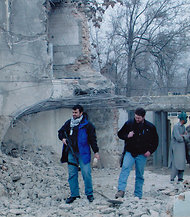 Ali H. Soufan, left, who as an F.B.I. agent spent years near the center of battle with Al Qaeda.

The agent, Ali H. Soufan, argues in the book that the C.I.A. missed a chance to derail the 2001 plot by withholding from the F.B.I. information about two future 9/11 hijackers living in San Diego, according to several people who have read the manuscript. And he gives a detailed, firsthand account of the C.I.A.’s move toward brutal treatment in its interrogations, saying the harsh methods used on the agency’s first important captive, Abu Zubaydah, were unnecessary and counterproductive.

Neither critique of the C.I.A. is new. In fact, some of the information that the agency argues is classified, according to two people who have seen the correspondence between the F.B.I. and C.I.A., has previously been disclosed in open Congressional hearings, the report of the national commission on 9/11 and even the 2007 memoir of George J. Tenet, the former C.I.A. director.

Mr. Soufan, an Arabic-speaking counterterrorism agent who played a central role in most major terrorism investigations between 1997 and 2005, has told colleagues he believes the cuts are intended not to protect national security but to prevent him from recounting episodes that in his view reflect badly on the C.I.A.

Some of the scores of cuts demanded by the C.I.A. from Mr. Soufan’s book, “The Black Banners: The Inside Story of 9/11 and the War Against Al Qaeda,” seem hard to explain on security grounds.

Among them, according to the people who have seen the correspondence, is a phrase from Mr. Soufan’s 2009 testimony at a Senate hearing, freely available both as video and transcript on the Web. Also chopped are references to the word “station” to describe the C.I.A.’s overseas offices, common parlance for decades.

The agency removed the pronouns “I” and “me” from a chapter in which Mr. Soufan describes his widely reported role in the interrogation of Abu Zubaydah, an important terrorist facilitator and training camp boss. And agency officials took out references to the fact that a passport photo of one of the 9/11 hijackers who later lived in San Diego, Khalid al-Midhar, had been sent to the C.I.A. in January 2000 — an episode described both in the 9/11 commission report and Mr. Tenet’s book.

In a letter sent Aug. 19 to the F.B.I.’s general counsel, Valerie E. Caproni, a lawyer for Mr. Soufan, David N. Kelley, wrote that “credible sources have told Mr. Soufan that the agency has made a decision that this book should not be published because it will prove embarrassing to the agency.”

In a statement, Mr. Soufan called the C.I.A’s redactions to his book “ridiculous” but said he thought he would prevail in getting them restored for a later edition.

He said he believed that counterterrorism officers have an obligation to face squarely “where we made mistakes and let the American people down.” He added: “It saddens me that some are refusing to address past mistakes.”

A spokeswoman for the C.I.A., Jennifer Youngblood, said, “The suggestion that the Central Intelligence Agency has requested redactions on this publication because it doesn’t like the content is ridiculous. The C.I.A.’s pre-publication review process looks solely at the issue of whether information is classified.”

She noted that under the law, “Just because something is in the public domain doesn’t mean it’s been officially released or declassified by the U.S. government.”

A spokesman for the F.B.I., Michael P. Kortan, declined to comment.

The book, written with the assistance of Daniel Freedman, a colleague at Mr. Soufan’s New York security company, is scheduled to go on sale Sept. 12. Facing a deadline this week, the publisher, W. W. Norton and Company, decided to proceed with a first printing incorporating all the C.I.A.’s cuts.

If Mr. Soufan ultimately prevails in negotiations or a legal fight to get the excised material restored, Norton will print the unredacted version, said Drake McFeely, Norton’s president. “The C.I.A.’s redactions seem outrageous to me,” Mr. McFeely said. But he noted that they are concentrated in certain chapters and said “the book’s argument comes across clearly despite them.”

The regular appearance of memoirs by Bush administration officials has continued a debate over the facts surrounding the failure to prevent 9/11 and the tactics against terrorism that followed. In former Vice President Dick Cheney’s memoir, set for publication next week, he writes of the harsh interrogations that “the techniques worked.”

A book scheduled for publication next May by José A. Rodriguez Jr., a former senior C.I.A. official, is expected to give a far more laudatory account of the agency’s harsh interrogations than that of Mr. Soufan, as is evident from its tentative title: “Hard Measures: How Aggressive C.I.A. Actions After 9/11 Saved American Lives.”

Government employees who hold security clearances are required to have their books vetted for classified information before publication. But because decisions on what should be classified can be highly subjective, the prepublication review process often becomes a battle. Several former spies have gone to court to fight redactions to their books, and the Defense Department spent nearly $50,000 last year to buy and destroy the entire first printing of an intelligence officer’s book, which it said contained secrets.

The C.I.A. interrogation program sharply divided the C.I.A. and the F.B.I., whose director, Robert S. Mueller III, ordered agents to stop participating in the program after Mr. Soufan and other agents objected to the use of physical coercion. But some C.I.A. officers, too, opposed the brutal methods, including waterboarding, and it was their complaint to the C.I.A.’s inspector general that eventually led to the suspension of the program.

“The Black Banners” traces the origins and growth of Al Qaeda and describes the role of Mr. Soufan, 40, a Lebanese-American, in the investigations of the East African embassy bombings of 1998, the attack on the American destroyer Cole in 2000, 9/11 and the continuing campaign against terrorism.

Starting in May, F.B.I. officials reviewed Mr. Soufan’s 600-page manuscript, asking the author for evidence that dozens of names and facts were not classified. Mr. Soufan and Mr. Freedman agreed to change wording or substitute aliases for some names, and on July 12 the bureau told Mr. Soufan its review was complete.

In the meantime, however, the bureau had given the book to the C.I.A. Its reviewers responded this month with 78-page and 103-page faxes listing their cuts.