25/03/2011 16:08
The new decree-law issued by the cabinet yesterday draws the ire of activists and labourers who plan to take their objections to the street in massive protests on Friday
Lina El-Wardani , Thursday 24 Mar 2011 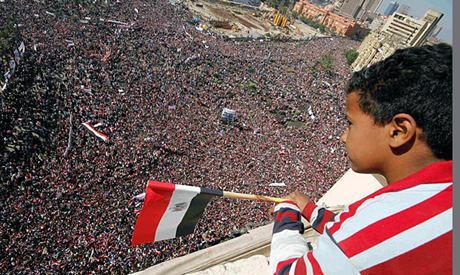 The Egyptian cabinet approved yesterday a decree-law that criminalises strikes, protests, demonstrations and sit-ins that interrupt private or state owned businesses or affect the economy in any way.

The decree-law also assigns severe punishment to those who call for or incite action, with the maximum sentence one year in prison and fines of up to half a million pounds.

The new law, which still needs to be approved by the Supreme Council of the Armed Forces, will be in force as long as the emergency law is still in force. Egypt has been in a state of emergency since the assassination of former president Anwar Sadat in 1981.

Many labourers have expressed their shock at the decree. “We really had hopes that the new government will support us and look into our demands. We expected them to say we have all of your legal demands on our desks and there is a timeline of a month or two within which they will be achieved,” said Ali Fotouh, a driver in the public transportation sector.

“I don’t understand what they mean by protests that affect the traffic and the business. This is not fair, why don’t you solve our demands so that we don’t go on strikes. This tone reminds me of the old days of Mubarak, threats and oppression used by the regime. This is no longer valid after January 25 Revolution.”

Many agree with Fotouh that this decree will incite even more protests and create even more distrust between the new government and the army on one side, and the people on the other.

In a statement issued today, the investment bank Beltone Financial said: “The law is more likely to face further protests and discontent. The Egyptian public has only just found its political voice and will, most likely, view this decision as another attempt to silence it. We agree that there is a need for work to resume normally once again, for Egypt’s economy to begin its recovery process, but we also believe that the government’s decision to criminalise protests and strikes could provoke further discontentment and more protests.”

Indeed the proposed law has incited a lot of anger, as can be gauged by the response on Facebook and Twitter. Activists have already called for protests tomorrow against the decree in Tahrir Square and in the main streets and squares in Egypt.

“Let’s show them what the revolution is about. Let’s all go out and protest against repression,” posted Hend.

Reham, also on facebook says “This is exactly what I feared would happen if the vote was in favour of the military's recommendations. They have achieved the division, gained a majority and feel safe to conquer. We need millions on the streets again. The revolution has been hijacked!”

Hala simply asks “What do you mean protests are not allowed by law? Did we do revolution to criminalize protests?”

On Twitter Wael said: “This law is another reminder for those who supported Essam Sharaf, here he is another copy of Shafiq and Nazif the ex prime ministers, these are all corrupt NDP members.”

For some activists, the law, if passed, will not change anything.

“It is another dictator law, the emergency law never stopped labour strikes during the 30 years Mubarak regime,” said Mustafa Basiounu, a member of the Revolutionary Socialists who doesn’t think that this law will affect the Egyptian labour movement in any way.

“This only shows us that the new cabinet is launching a counter revolution. I am only surprised they have announced their hatred to the revolution that fast,” added Basiouni.

Another problem with the law is its wording with many unclear what it means by those who hamper the economy. “It is so vague, I don’t understand who they mean. They left the TV strike people, but they attacked the students’ strike at Cairo University. What does that mean?” wonders political activist Amr Asaad who is perplexed by the proposed law.

Basiouni agrees with Asaad on the vagueness of the law but believes that “dictator laws are supposed to be vague so that they apply it whenever they want and on whomever they want. It could apply to looters and to honourable labourers,” he said, adding that it will not affect the labour movement. “The Egyptian labour movement is the backbone of the Egyptian revolution. Those who try to counter it are trying to counter the revolution.”

Fotouh also takes a withering view of the law. “Egypt is now a free country, no law will repress us. This law will be rejected, this time not through a rigged parliament but in Tahrir Square. They have to understand this is where we have our legitimacy.”