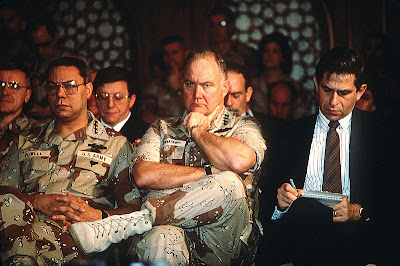 Paul Wolfowitz (right) in 1991 was apparently pleased with the
outcome of Desert Storm. He believed that the time was ripe
to seize global hegemony before another world power rose to
challenge the Anglo-American establishment.

Long before the verified lies of Qaddafi's "door-to-door" genocide and even before the media cleverly tagged the engineered destabilization of the Middle East the "Arab Spring," Libya was already marked for destabilization and regime change. For nearly thirty years the US and UK have funded groups both inside Libya and beyond its borders in various attempts to remove Qaddafi from power. The current administration's feigned ignorance over the nature of the rebels in Libya is nothing short of absolute deception. The CIA and MI6 are on record for decades following, and in many cases supporting, these very groups.

Below is a partial time line covering Western efforts to implement regime change in Libya.

1980's: US-CIA backed National Front for the Salvation of Libya (NFSL) made multiple attempts to assassinate Qaddafi and initiate armed rebellion throughout Libya.
1990's: Noman Benotman and the Libyan Islamic Fighting Group (LIFG) wage a campaign of terror against Qaddafi with Osama Bin Laden's assistance.
2003: Upon Qaddafi's abandonment of WMD programs, Libya's collaboration with MI6 & the CIA to identify and expose the LIFG networks begins, giving Western intelligence a windfall of information regarding the group.
2005: NFSL's Ibrahim Sahad founds the National Conference of Libyan Opposition (NCLO) in London England.
2011: Early February, the London based NCLO calls for a Libyan "Day of Rage," beginning the "February 17th revolution."
2011: Late February, NFSL/NCLO's Ibrahim Sahad is leading opposition rhetoric, literally in front of the White House in Washington D.C. Calls for no-fly zone in reaction to unsubstantiated accusations Qaddafi is strafing "unarmed protesters" with warplanes.
2011: Late February, Senators Lieberman and McCain and UK PM David Cameron call for providing air cover for Libyan rebels as well as providing them additional arms.
2011: Early March; it is revealed UK SAS special forces are already operating inside Libya
2011: Mid-March; UN adopts no-fly zone over Libya, including air strikes. Immediately, the mission is changed from "protecting civilians" to "ousting Qaddafi." Egypt violates the arms embargo of UN r.1973 with Washington's full knowledge by supplying Libyan rebels with weapons, while Al Qaeda's ties to the rebels are admitted by everyone including the rebels themselves.

Recently, Fareed Zakaria on his CNN show interviewed a former Libyan Al-Qaeda associate, Noman Benotman, to dispel "allegations" that Al Qaeda was playing a key role in the rebellion against Qaddafi. Benotman would concede that Al Qaeda was involved but not significantly, suggesting there were only a few hundred fighters. The Washington Times would later quote Benotman upgrading the number to a thousand. Then after Libyan rebel leader Abdel-Hakim al-Hasidi admitted to recruiting extremists into his ranks and that he believed Al Qaeda members were "good Muslims," Benotman began back peddling and even claiming, "The way they start to make statements or to understand the conflicts is unbelievable, beyond my imagination. The only explanation I can offer is because they have been affected - whether they like it or not - by the wave of democracy."

For the Libyan Islamic Fighting Group, which was founded in the mountains of Afghanistan during the CIA-backed war against the Soviets, then fighting the Americans in both Afghanistan and Iraq, now having the CIA back on the ground in Libya by their side may seem like a reunion of sorts, punctuated by the irony of jets flying overhead that had been hunting them abroad but are now protecting their lives. But to the thousands of US soldiers who have died and the tens of thousands maimed and destroyed supposedly fighting Al Qaeda, to the Americans who have been financially bled to death over the last ten years of war, and to the millions of people in Iraq, Afghanistan, Pakistan, and now Libya who have been killed, maimed, displaced or otherwise affected by the "War on Terror," it is more like the punchline of a bad joke.

But the implications go much deeper than merely a conjured army of duped extremists, serving the globalist agenda every step of the way. The implications are deep, and dark indeed.

Ten days after 9/11, General Wesley Clark visited the Pentagon where an officer from the Joint Staff warned him of an impending attack on Iraq. After the Afghan invasion, this officer shared with Clark a document handed down from the Office of the Secretary of Defense indicating plans to attack and destroy the governments of 7 countries; Iraq, Syria, Sudan, Somalia, Iran, Lebanon and Libya. General Wesley Clark would go on to share this story in a 2007 speech given to the Commonwealth Club of California where he repeated this list.

Of course, the campaigns have already begun against each of the nations Clark listed. Iraq was invaded, decimated, and has been occupied by US troops since 2003. In 2006, Israel attempted to invade and dismantle Hezbollah in Lebanon but the conflict ended in a stalemate and an eventual Israeli withdrawal. Somalia was attacked by a proxy Ethiopian invasion force with US air support starting in 2007, but it too eventually ended in failure. A silent war has already begun within Iran, including covert military operations, the arming of terrorists, assassinations, and 2 failed US backed color revolutions. Sudan has been recently carved into two states and Syria is now being intentionally destabilized by US trained and funded activists.

And now, of course in Libya's case, aerial bombardment by US, UK, and French warplanes has begun, while the CIA and MI6 are on the ground attempting to collapse the Qaddafi regime.

Wesley Clark would backtrack in his 2007 talk in California and recall a conversation he had in 1991 with then Undersecretary of Defense for Policy Paul Wolfowitz regarding Desert Storm. Clark was told that America's intervention in Iraq proved that the US could use its military force and the Soviets wouldn't stop them. Wolfowitz said the US had 5-10 years to clean up the old Soviet "client regimes" before the next super power rose up and challenged western hegemony. Clark claimed that this, along with the aftermath of 9/11 constituted a policy coup where Dick Cheney, Donald Rumsfeld, Paul Wolfowitz, and the other members of the of Project for a New American Century had hijacked US foreign policy to destabilize and turn the nations of the Middle East upside down - much the way they are now. The "Neo-Conservative" element of this current round of destabilization goes deeper than the promotion of war, as the "Neo-Cons" have uncharacteristically dedicated themselves to "human rights" and "democracy" side-by-side with the likes of George Soros and Zbigniew Brzezinski.

General Wesley Clark tells of how Middle East destabilization
was planned as far back as 1991, with the destruction of Iraq,
Syria, Lebanon, Sudan, Somalia, Libya, and Iran on the
drawing board following the invasion of Afghanistan.

Bush campaigned on an anti-war, anti-nation building platform. Obama then pledged to roll back the agenda Bush swindled the nation into, only to then continue it in earnest. All along we have been treated to the theatrics of the corporate-owned media, with pundits on the left and right reacting in shock and surprise as these engineered events unfolded according to plan.

Despite Wolfowitz' agenda being meted out nearly 20 years ago, the ham-fisted nature of both the operation itself in Libya and the propaganda surrounding it suggests a rushed sense of desperation on the globalists' behalf. Wesley Clark suggested that the operation to destabilize the Middle East and Northern Africa would take 5 years, starting in 2001. Wolfowitz believed that in 1991 the operation would have taken 5-10 years. The failed FBI attack on the World Trade Center in 1993 was most likely the staged impetus to trigger the first blitzkrieg. Not only did the attacks fail to cause the catastrophic effects needed to justify such an operation, the Egyptian informant assisting the FBI had recorded his conversations with agents indicating that they were indeed building a bomb for extremists and providing them with real explosives as well.

1993 would have fit in perfectly to tip off Wolfowitz' plan. Upon failing, he and his PNAC cadre would attempt to destroy the World Trade Center buildings again, this time successfully on September 11, 2001. The catastrophic loss of life, the confusion, and the rage that was left in its wake gave the PNAC what they called a "new Pearl Harbor" they claimed they needed in their September 2000 report titled "Rebuilding America's Defenses."

These men, who in fact helped create Al Qaeda in the mountains of Afghanistan to face the Soviets in the 80s would call on their legion of foreign mercenaries to wreck havoc across the planet, heralding globalist intervention along the way. Certainly this had nothing to do with defending America or spreading "democracy" but rather bolstering the hegemony of the corporate-financier oligarchy that both the PNAC cadre and the bankers who thoroughly saturate Obama's administration constitute.

What appears to have happened is a costly delay in 1993 and a post-9/11 campaign that has dragged on 5 years longer than expected. With the same clumsy hands fumbling in Libya also trying to stab simultaneously at both Moscow and Beijing with their agenda laid on the table openly for all to see, failure on the globalists' behalf now may incur a wrathful response from a planet about to truly awaken.

It should be expected that that any excuse to complete regime change in Libya will be made, including creating the conditions necessary to put troops on the ground - be it because of a failing rebellion, a false flag attack carried out in Qaddafi's name, or even feigned fears the globalists' own Al Qaeda might "seize" Libya should they not intervene. Similarly, with the US openly admitting to funding subversive activities across the Arab world, in Iran, and even as far as China, the globalists have painted themselves into an irredeemable, inescapable corner of confrontation.

Look past the feckless puppets occupying our public offices and toward the corporations and financial empires that are our true "misleaders." Boycott these corporations and systematically replace them by getting self-sufficient as an individual, as a household, and as a community. Independence is freedom, freedom is independence and the dominion of this dark empire can be broken by understanding that they need us, we do not need them.

For ways to battle the globalists by achieving self-sufficiency and freedom through independence please read on: