Global Non-Compliance website > Got Bin Laden (Allegedly) and USA “Freaks Out” on Fear, False Alarms, and 911 style forfiture of Liberties

Got Bin Laden (Allegedly) and USA “Freaks Out” on Fear, False Alarms, and 911 style forfiture of Liberties 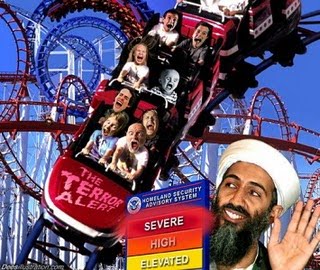 So Much for the John Wayne, or even Bruce Wayne style, “Cowboy Up” tough American settler myth / Street smart Caped crusader myth. Post Osama America suffers deja vu all over again as Government Officials, and bureaucracies fan the flames of fear, and discuss further potential clamp downs on transportation, and public events in a way that could even make George Bush blush.

Actually there is a famous antic-dote about John Wayne which if true does embody the former image of feral American life. It seems that the US Govt contacted Mr Wayne at some point during the “Cold War” to warn him of a Communist plot intercepted from the former USSR, to assassinated him; and with him the image of the rugged, No BS, Kill em all and let God sort em out American. The American Govt offered to place John Wayne under their immediate protection. Wayne’s reply? No Thanks. “Me and the Boys are fully armed here. Tell them Ruskies to bring it on! Were ready, locked and loaded.”

In this story we can fully appreciate the Old world order American, while the NWO American begs for protection from a dead terrorist, whom was once a CIA asset (Tim Osman) running a P2OG / Gladio style group known as Al CIA da.

Of course the odds of being killed by a terrorist aren’t much better than winning the Lottery, and much worse than dying from medical malpractice, auto accidents, eating processed food, or slipping in the bathtub…. But hey – If YOU want to give up your freedoms for “safety” – please dont drag the rest of us down with you. Go live in a gated community, get your own L Al replica airlines, or gestapo trains. Move to Chicago LA or NY… Live in a place far away from me. I guaran – freaking – Tea ya that YOU and your Fear will be the first attacked by opportunistic criminals and parasites looking for that easy wall to climb and a victim that is too afraid to fight back.

Freedom can be messy, true…. But I would rather die on my feet than “live” on my knees.

While the Fear based mind conditioning continues, and the mass pick pocketing of American wealth escalates… Or when the next False Flag Terror Attack moves forward…. I can only encourage my fellow Americans to remember this famous quote by our founding fathers: THOSE WHO TRADE LIBERTY FOR SECURITY DESERVE NEITHER LIBERTY NOR SECURITY.

Security is an ILLUSION and just another word for CONTROL!