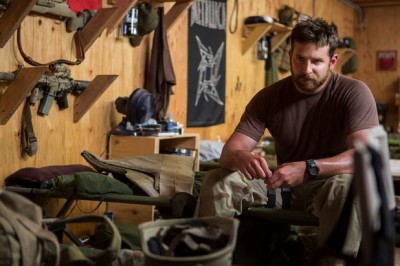 If ever the direction of a film and the shape of a particular narrative of US history, as written by, say, the fiction set on Fox News, could come together, then American Sniper is it. Not that you will have director Clint Eastwood, screenwriter Jason Hall and main actor Bradley Cooper agree.

It all begins with a view of history seen through the eyes of the late Navy Seal Chris Kyle, deemed one of the US Army’s deadliest snipers who served on four tours of duty in Iraq.  It is from that preserve that the cinematic account springs from, guided by the memoirs titled American Sniper: The Autobiography of the Most Lethal Sniper in US Military History (2012).

Eastwood’s choice of conflict is excruciatingly cruel, an example of naked force exercised on false pretences.  It was a war that commenced with a deception, marshalled against the dictates of international law.  The Bush administration, doing its level best to imaginatively read available intelligence, invaded Saddam Hussein’s Iraq, assuming it had those fabled Weapons of Mass Destruction (WMDs).  The conflict served to destabilise not merely a state but the Middle East, unleashing the Sunni-Shiite fault line with incandescent fury and laying the ground for a future fracturing of the state.  The Islamic State, to name but one force, has profited immensely from the zealous, foolhardy exercise.

That leaves the world view of Kyle, which is less that of geopolitical strategist than soldier patriot immersed in his job.  What, then, is he fighting?  “Savage despicable evil,” storms Kyle in his autobiography. “That’s what we were fighting in Iraq.” As for why the United States was there, the mindset of the liberator rapidly becomes that of the avenging killer.  “They hated us because we weren’t Muslim. They wanted to kill us, even though we just booted out their dictator, because we practiced a different religion than they did.”

Eastwood, and Hall, insist that Kyle’s world is divorced from that of the political.  In Eastwood’s words, “Pardon me for sounding defensive, but it certainly has nothing to do with any (political) parties or anything” (Toronto Star, Jan 13). Hall graces Kyle with the status of a firm believer and emphasised how it “cost him his physical health, his mental health and almost cost him his family” (Time Magazine, Jan 21). Patriotism, in short, is tragedy.

Elevating the malformed views of Kyle, ones best kept at home, to the level of myopic patriotism doesn’t diminish its resounding shallowness.  Manifest destiny needs its recruits, and Kyle performed that mission with uncritical thrill.  His autobiography constituted an unvarnished apologia for an illegal invasion, a justification filled with blatant inaccuracies about finding “barrels of chemical material that was intended for use as biochemical weapons,” and pieties about misguided Muslim “savages”.  He does confess to drawing the line somewhere – not shooting people, for instance, with Korans.  “I’d like to, but I don’t.”

The chest-thumping bravura about a sniper boasting of 160 kills can leave room for Augustinian reflection about the heaviness war can bring, but Kyle doesn’t allow it.  There is no room for reflecting about the people he is dispatching, no amateurish anthropology or insight.  There is, in fact, a distinct lack of pathos, a sense that the sniper is merely a child gone mad with his lethal toy fighting under the Stars and Stripes.  “I only wish I had killed more,” he says in American Sniper.

Duty is everything, and duty is what excuses everything.  Kyle’s first kill with a sniper rifle, was a woman, who walked out of a house fifty yards away from an approaching Marine convoy.  She seemed to be drawing out a concealed grenade.  “It was my duty to shoot, and I don’t regret it.  The woman was already dead.  I was just making sure she didn’t take any Marines with her.”

Eastwood should certainly be allowed cinematic latitude, but he does not seek to improve upon the subject matter he has.  (Is it actually possible?)  And there are a host of defenders happy with the clipped version they have.  The conservative heavies, such as Rupert Murdoch, have been busy targeting the likes of Seth Rogen and Michael Moore for an apparent lack of sympathy, either about the role of snipers in general (cowards, for Moore) or parallels with Nazi propaganda on snipers featured in Quentin Tarantino’s Inglourious Basterds (the subject of Rogen’s comment). “Hollywood leftists trash American Hero, show how completely out of touch they are with America.  Bravo Clint Eastwood!” (Hollywood Reporter, Jan 23).

There is even a sympathetic nod from the History Channel, which has mutated into the Channel of Non-History.  Christopher Klein sports an article on the site describing Kyle’s drinking, depression and the creation of the FITCO Cares Foundation in 2011 to encourage exercise equipment and counselling for veterans (History.com, Jan 21).

But Eastwood insists on grouping the sniper of his portrayal with other personnel, some of whom bore heavy consciences.  He speaks of, “These fellows who are professional soldiers, Navy personnel or what have you, go in for a certain reason… and there’s no political aspect there other than the fact that a lot of things happen in war zones” (Toronto Star, Jan 13).  Kyle doesn’t quite make the grade.

As instruments of state, soldiers remain political extensions, whether Eastwood wishes for them to be otherwise.  Instead, he tends to, in the words of Matt Taibbi, turn his subject into the nutritional value of baby food, where the narrative is purposely emptied of broader significance (Rolling Stone, Jan 21).

As for Kyle himself, he was far from having the nutritional value of baby food.  He enjoyed killing and made no secret of that fact.  “I loved what I did… It was fun. I had the time of my life.”