Global Non-Compliance website > How Much Gold Was Under WTC Complex?

How Much Gold Was Under WTC Complex? 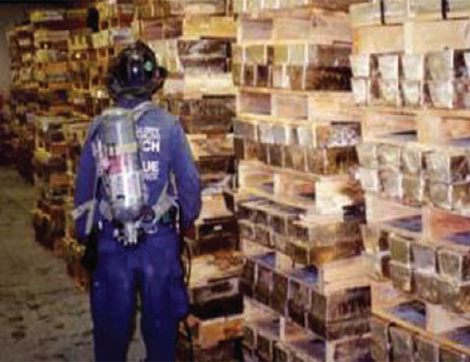 Earlier this year, a coin dealership ran a television ad for a 10th-anniversary 9-11 commemorative coin that was allegedly “clad in .999 pure silver actually recovered from vaults beneath the ashes of Ground Zero.”

In the aftermath of the devastating attacks on 9-11, DePrisco was assigned to the Office of Emergency Management to assist in recovering precious metals buried in a two-story vault beneath the rubble of Trade Center (WTC) Building 4 and transfer it to another vault at the Brooklyn Naval Yard World.

He said the operation began on Oct. 16, 2001 and lasted for two days. DePrisco reminisces about the moment he walked into the vault. He said, “It was like a scene out of [the James Bond movie] Goldfinger . . . endless neat stacks of gold, silver and platinum bars—a half-billion dollars worth.”

According to The New York Daily News article, “We never recovered any other precious metals,” said DePrisco. “So it boils my blood that anyone would sell a fake coin claiming to be made with silver recovered from Ground Zero.”

The Daily News has since contacted the dealer of these coins, who responded by saying that they were in fact authentic. The company said they have a complete chain of custody for the merchandise and claim to have bought these items from a company that purchased them from a bank “storing silver bars, coins etc. in its vaults under the WTC.”

The fate of nearly $1 billion worth of gold, silver and other precious metals stored beneath the WTC before 9-11 continues to baffle many.

To this day, only $230 million has officially been accounted for. All of that was retrieved from the previously mentioned, two-level, 6,000-square-foot vault maintained by the Bank of Nova Scotia. They reportedly lost $200 million in gold as a result of the attacks. However, other estimates suggest there was an additional $750-million worth of precious metals that may have been stored in other vaults or hurriedly evacuated from the Nova Scotia vault before the skyscrapers came down.

According to a Nov. 1, 2001 article in The London Times: “The Comex metals trading division of the New York Mercantile Exchange kept 3,800 gold bars—weighing 12 tons and worth more than $100 million—in vaults in the building’s [apparently Building 5—Ed.] basement. Comex also held almost 800,000 ounces of gold there on behalf of others with a value of about $220 million. It also held more than 102 million ounces of silver, worth [an estimated] $430 million.”

The Times piece also reported that some of the recovered gold may have been found outside this vault.

“The gold, which was discovered . . . was being transported through the basement of the building on the morning of Sept. 11,” reads the article. “Recovery workers reached a service tunnel and discovered a 10-wheel [truck] and a number of cars [that] had been crushed by falling steel.”

Another article appearing in The New York Daily News around that same time corroborates this story:

“Sources said the gold was found in a delivery tunnel under 5 World Trade Center.”

If these accounts are true, they strongly conflict with the official story, which alleges that all the recovered metals were found inside the Bank of Nova Scotia vault under WTC 4. This has led some to speculate that insiders with short-term advanced knowledge of the attacks made a frantic effort to transfer the treasures by truck to a safe, undisclosed location.

Was the uncovered 10-wheel truck the last in a fleet of gold-laden rigs with an armed security escort? Did personnel decide to abandon these vehicles and flee on foot as they heard the structure above them giving way? Answers to these questions may never be fully addressed so long as the federal government refuses to revisit the 9-11 tragedy with an adequate investigation.

Meanwhile, some insist the official story is an unabashed lie and that another reason behind the 9-11 attacks was to pull off the biggest gold heist in history. One of the more outrageous claims along this vein comes from former mob boss Tony Gambino, who declared in a 2007 radio interview: “I know for a fact that Bush [and other] U.S. government leaders had prior knowledge and helped organize 9-11. They did it for many obvious reasons, one being to instigate a war in Iraq. But they also did it to get their hands on all the gold that was hidden below the [WTC].”

Gambino claims that his grandfather’s construction company built the WTC and installed underground vaults to warehouse vast quantities of gold, where it was later stolen on 9-11.
——
Keith Johnson is an independent journalist and the editor of “Revolt of the Plebs,” an alternative news website that can be found at RevoltofthePlebs.com.