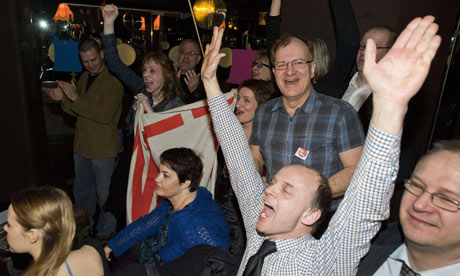 Icelanders celebrate the defeat of a renegotiated compensation plan for Britain and the Netherlands following collapse of the Icesave bank. Photograph: Halldor Kolbeins/AFP/Getty Images

Icelanders have rejected the latest government-approved plan to repay the £3bn owed to Britain and the Netherlands from the crash of the country's banking system in 2008, prompting the prime minister to warn of economic and political chaos.

Final results from five of six constituencies, including the capital, Reykjavik, showed the "no" side taking nearly 60% of the vote, meaning the dispute is likely to end up in a European court.

"The worst option was chosen," said the prime minister, Jóhanna Sigurðardóttir. "The vote has split the nation in two. We must do all we can to prevent political and economic chaos as a result of this outcome."

The debt was incurred when Britain and the Netherlands compensated their nationals who lost savings in online Icesave accounts owned by Landsbanki, one of three Icelandic banks that collapsed in late 2008.

Icelandic politicians in February backed a repayment plan agreed with creditors, but the president refused to sign the bill, triggering the vote. In March last year, Iceland rejected an earlier Icesave repayment blueprint in a referendum.

Economists say uncertainty over the payback deal is hurting efforts to drag Iceland out of recession, end currency controls and boost investment. Many voters cited opposition to taxpayers footing the bill for irresponsible bankers as their reason for voting against the plan.

"I know this will probably hurt us internationally, but it is worth taking a stance," said Thorgerdun Ásgeirsdóttir, a 28-year-old barista, after casting a "no" vote.

Svanhvit Ingibergs, 33, who works at a rest home, said: "I had no part in causing those debts, and I don't want our children to risk having to pay them. It would be better to settle this in a court."

Sigurðardóttir said Iceland would now defend its case before the court of the European trade body overseeing Iceland's co-operation with the EU, the Efta Surveillance Authority (ESA). Economists have said this route could be much costlier.

Iceland is still pulling itself out of a deep recession. Politicians and economists believe solving the Icesave issue would help the country get back into international financial markets. Getting such funding is also part of a plan to end the controls on capital flows it imposed in 2008 to stabilise a tumbling currency.

The controls have left an estimated equivalent to a quarter of Iceland's gross domestic product in the hands of foreign investors, many of whom are expected to want to pull out. Ratings agencies will have followed the vote closely, with Moody's having said it may lower its credit rating on Iceland after a "no" vote.