Los Angeles Airport Shooting Appears To Be Another Psyop Hoax

In recent times we’ve had a number of highly publicized mass shooting rampages in which the official story was full of outright lies and deception.  The so-called Sandy Hook and Washington Navy Yard shootings are just two good examples of this.  This past Friday’s alleged Los Angeles airport shooting at a TSA security checkpoint is no exception as there are already a number of questions surrounding the official story.  In fact the official story has already changed a couple of times which has further ruined its credibility.  At first the shooter was identified as a disgruntled TSA worker by law enforcment sources.  That story has since been revised with the shooter now identified as an angry patriot who wanted to kill as many TSA agents and cops as possible.  Conveniently the official story is being presented in such a way where the corporate media stooges can further criticize the Second Amendment and people who have problems with the government.  It is also very likely that we will see this event used as justification to arm TSA agents. 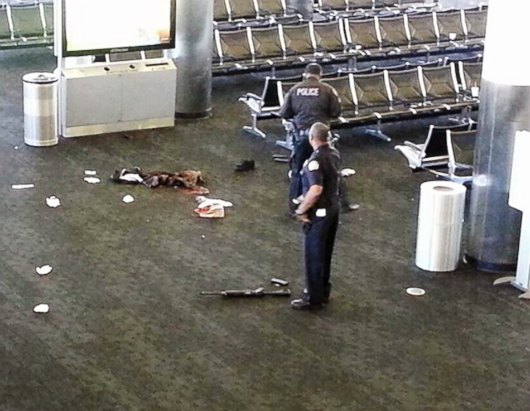 Here’s a few of the main reasons why this story seems to be a complete and total fabrication.

The alleged shooter has been identified as someone with the name of Paul Anthony Ciancia.  Look at the two CIA references in his last name.  What are the odds of the shooter having a name like that?  This appears to be an inside joke by the clowns who put together this operation.

Ciancia if that is even his real name to begin with has been described by friends and family as a bit of a loner but not someone who they thought would ever be capable of doing something like this.  He has also been described as not having any prior criminal background.  Undoubtedly this is a convenient profile for the government to continue fear mongering about lone wolf and domestic terrorists.  Again what are the odds that the shooter would fit this exact profile?  This type of profile gives more ammunition to the promoters of fear in both the government and the corporate media.

During a press conference Los Angeles airport police chief Patrick Gannon said that they recently had an exercise practicing the exact same scenario just three weeks earlier.  Gannon would even slip up and say that they played the same thing out the day of the shooting indicating that the event was staged in some fashion.  In the press conference video carefully look at the body language of the people behind Gannon when he talks about the exercise.  FBI agent David Bowdich who is located behind and to the left of Gannon looks particularly concerned when Gannon makes that remark because he realizes that Gannon messed up and revealed too much.  Let’s face it though, if this wasn’t staged the odds of their training exercise and a similar real world event happening within just three weeks of each other is extremely low.

Amazingly, the shooter is said to have had notes in his bag talking about how the TSA is a fascist organization, references to the New World Order and other messages which have been described as anti-American ramblings from a conspiracy theorist.  Looks as if they thought this part of the story would give them more bang for their buck since so-called conspiracy theorists are the only people doing any sort of real investigative journalism.  The odds of this being part of a real life non-scripted event is ridiculously low.

The shooter was even said to have used an AR-15 rifle which the gun control lobby has been foaming at the mouth to ban.  Here we have yet another convenient angle to the official story which will likely be used to justify more anti-gun legislation from clowns like Dianne Feinstein and others of her ilk.

In both a CBS and ABC news report (1:50 in) covering the shooting a helicopter camera shows a couple of cops quickly pushing a wheelchair down the road with a dummy in it.  An Associated Press report also shows similar footage.  The dummy has what appears to be a TSA uniform on and is actually identified in the CBS report as a wounded TSA agent.  This is despite the fact that the video conclusively shows that they are pushing a dummy around.  Not only that, but for someone who was supposedly shot you certainly don't see a whole lot of blood on the uniform.  The dummy looks like it has some sort of water stain on its chest but that's about it.  It is completely and utterly insane.

Media idiocy and scripting aside, why would cops or any first responders in a real world situation be wasting their time running down the road with a dummy in a wheelchair unless this was part of a drill or a more elaborate hoax?  Watch the video and you will see how plainly ridiculous it is.  It is absolutely comical that CBS or any other news organization would even try to claim that it was anything but a dummy.  This is a major fail on their part.  Maybe next time they’ll get their lies straight.

So far no video footage from security cameras of the actual incident have been released to the press.  Only a couple of still photos showing the supposed crime scene have been provided by law enforcement.  If this happened at any TSA checkpoint at any airport in the United States there would have been multiple video cameras recording everything that happened.  If the events unfolded exactly as we are being told than why haven’t they released the video footage yet?  It seems as if this would be a simple thing to do unless of course the story is entirely fabricated.

It is also worth noting that the shooter is in critical condition after allegedly being shot by law enforcement.  Considering how ridiculous the official story is, it is very likely that we will be told of his death very soon.  They obviously can't have him telling his side of the story.  It is possible with what we know so far that he might have been setup and thought that he was participating in some sort of TSA sanctioned drill.

There are probably other inconsistencies and questions surrounding this event but the ones described here prove conclusively that the official story is not believable.  Every aspect to the official story indicates that this was a scripted psychological warfare operation of some kind.  Even if you don’t believe that this was a hoax, there is no question that this incident will be used to push for more gun control and to arm TSA agents.  That’s right, more guns for government security enforcers and fewer guns for average Americans.  Apparently the Obama regime doesn’t have enough armed goons to control the public so this is certainly a great excuse for them to increase the number of armed thugs at their disposal.