MI6, SAS Working Together To Take Control In Libya

Britain is to send teams of spies and diplomats into Libya to help oust Colonel Gaddafi, it emerged last night.

MI6 operatives backed by the SAS are to land in the east around the key rebel stronghold of Benghazi 'within days'.

In addition, 600 soldiers of the Black Watch are on 24-hour standby to fly in and avert a humanitarian catastrophe as Libya erupted into a new wave of bloodshed. 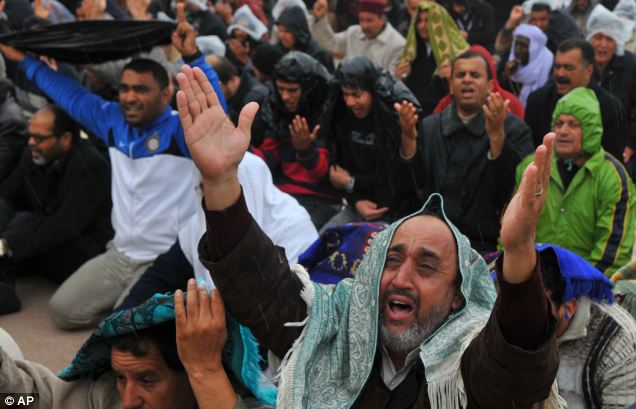 Frustration: Anti-Gaddafi protesters during prayers in Benghazi. Britain is to send teams of spies and diplomats into Libya to help oust Colonel Gaddafi 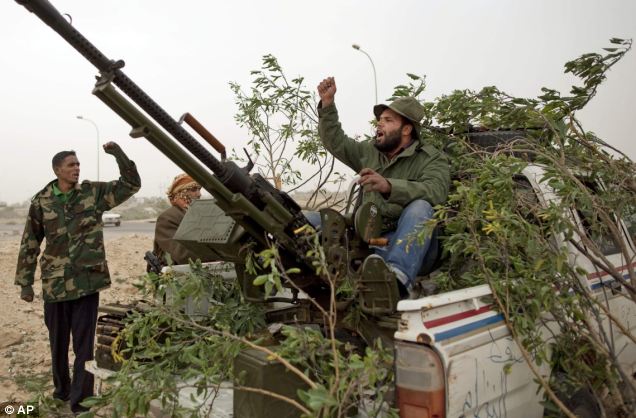 Unrest: Anti-Gaddafi rebels head to the frontline near Ras Lanuf, west of the town of Brega 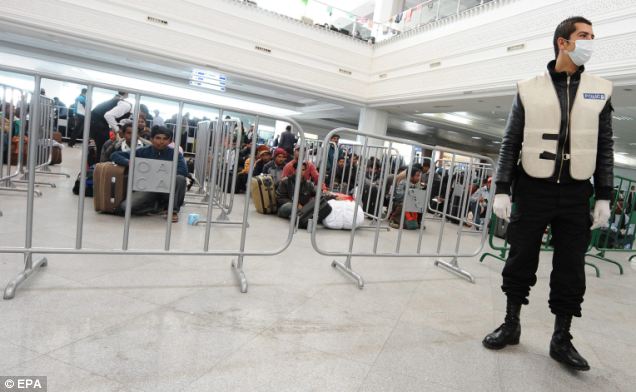 Taking flight: The airport of Djerba, Tunisia, is crowded with thousands of refugees evacuated from Libya

Witnesses said 50 people were killed and 300 wounded in clashes at Zawiyah, 30 miles west of the capital Tripoli.

Victims included two rebel commanders. Last night another 17 died in a blast at an ammunition depot near Benghazi.

Around 200 of the 600 UK troops are ready to deploy at South Cerney forward barracks near RAF Lyneham, Britain's main military air transport base. 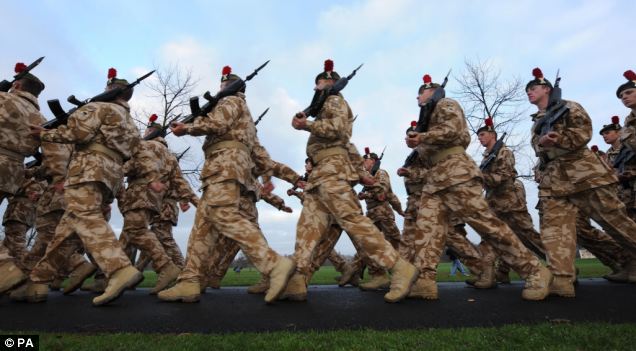 Ready: 600 soldiers of the Black Watch are on 24-hour standby to fly in and avert a humanitarian catastrophe in Libya (file picture) 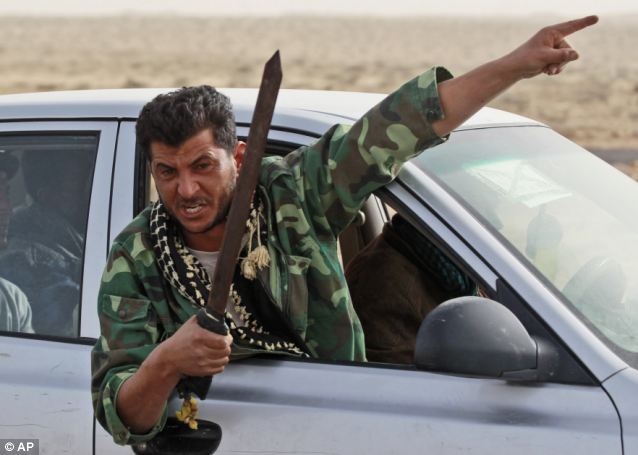 No mercy: A Libyan rebel holds a sword as he rides in a car to the frontline near Brega

British diplomats and spies have been engaged in intensive efforts to speak to opposition forces, which are led by Mustafa Abdel Jalil, head of the rebel National Libyan Council.

Now ministers have approved a presence on the ground to gather information and boost the chances of the rebels.

The liaison teams will be primarily composed of envoys but will include some intelligence officers.

They will link up with Special Forces already in Libya to provide protection and give informal military advice to the Libyan opposition. 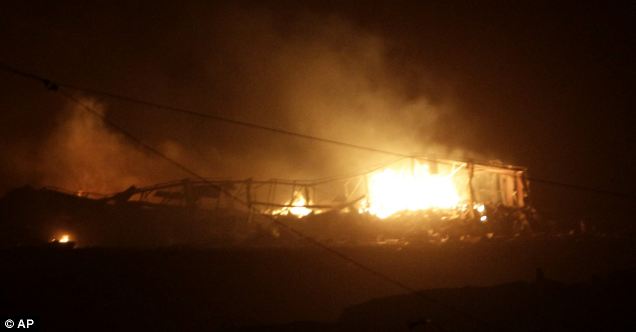 Ablaze: Flames are seen after an explosion at an ammunition storage facility at a military base in the rebel stronghold of Benghazi 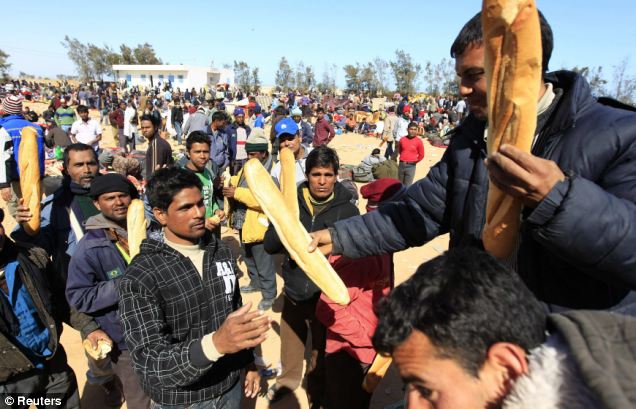 Desperate: A volunteer hands out bread to migrant workers at the Libyan and Tunisian border crossing of Ras Jdir after fleeing the unrest 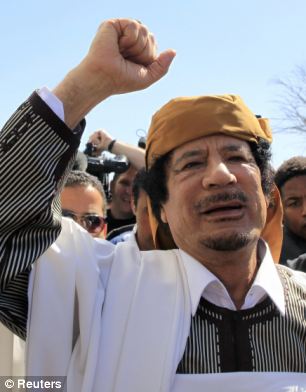 Defiant: Muammar Gaddafi waves in Tripoli on Wednesday before making a speech in which he sought to defuse tensions

The teams are said to be there 'primarily' to gather information. But they will advise the rebels on how to secure a handover of power and set up a democratic government.

'Once we get to the stage where we have a transition, part of what we're looking at is supporting that transition,' a source said.

Britain has also stepped up its military preparations, sending the frigate Westminster and the Royal Fleet Auxiliary ship Argus to the area.

Britain still has three Chinook helicopters in Malta. And military planning for a No Fly Zone gathered pace yesterday when the North Atlantic Council tasked Nato military authorities with providing a range of plans yesterday.

Britain is likely to play a central role in any military action since the continuing evacuation and humanitarian aid flights are all being coordinated by a Joint Force Headquarters in Malta.

It is understood that the UK is more likely to supply air-to-air refuelling planes and AWACS spy-in-the-sky aircraft to any No Fly Zone operation.

These planes are already flying around Libya's air space monitoring Colonel Gaddafi's use of his air force and helicopter gunships.

But a senior security official yesterday made clear that Britain will not be supplying arms and ammunition - in contrast to last Monday when Prime Minister David Cameron said he would consider arming the opposition - an off-the-cuff reply to an MP which led to accusations of sabre rattling. 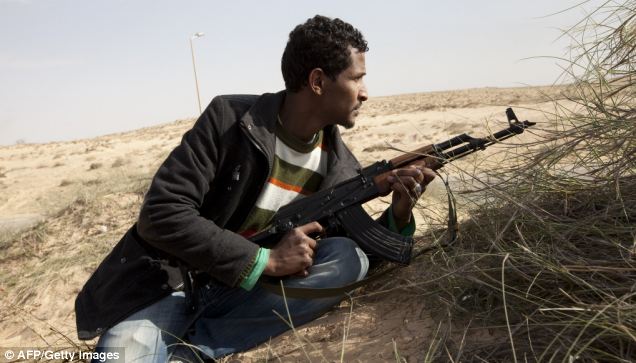 Resistance: A Libyan rebel fighter is seen close to Brega as pro-Gaddafi soldiers and mercenaries armed with tanks and heavy artillery stormed the city some 125 miles southwest of Benghazi

Officials say they are 'very concerned' by the lack of information about western Libya, the area under the command of Gaddafi's forces and where aid agencies have been denied access.

Shops and banks are still operating in Benghazi and other towns in the east and rebel forces have access to food and medicine.

Diplomats are also monitoring rebel-held towns such as Misurata, which is under attack from Gaddafi's forces from both sides.

There, food and medicine are feared to be running out - which could lead to calls for air drops of aid.

The Foreign Office says fewer than ten Britons who want to leave are still in Libya and yesterday finally warned Britons against going to the country.