By JULIAN E. BARNES in Washington, MARGARET COKER in Tripoli and CHARLES LEVINSON in Benghazi, Libya

A ragtag army of opponents to Col. Moammar Gadhafi began moving west toward Tripoli from the east and the U.S. ordered two warships to the Mediterranean Sea, as the prospect of an extended war loomed over Libya. 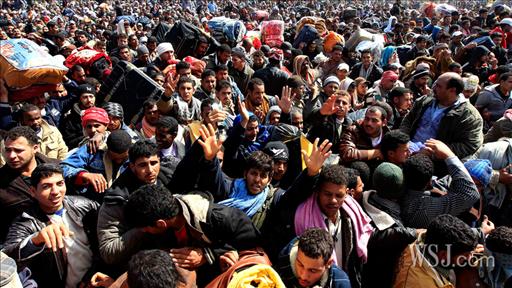 Margaret Coker reports from Tripoli on the latest on the standoff in Libya between pro-Gadhafi forces and anti-government rebels as both sides dig-in for a protracted confrontation. Plus, Gold hits a record high and the countdown to iPad 2.

A convoy of armed youth, including what appeared to be rebel military forces, was seen heading Tuesday night toward the pro-Gadhafi stronghold city of Sirte, witnesses said. The forces were viewed passing westward through Ajdabiya, a city about 75 miles from the opposition stronghold of Benghazi, said four residents, including a volunteer rebel soldier and an official on the city's local leadership council. It was unclear how many rebels were on the move.

Also Tuesday, the U.S. ordered two warships and 1200 Marines to the waters off of Libya, but a top Obama administration official stopped short of saying the forces would intervene in the clashes that have consumed the country following anti-Gadhafi protests here in recent weeks.

At a Pentagon briefing, Defense Secretary Robert Gates announced he had ordered to the Mediterranean the USS Ponce and the USS Kearsarge, an amphibious-assault ship that typically carries infantrymen and troop-transport helicopters. Those ships currently have 800 marines, in addition to 400 U.S.-based Marines who will be airlifted to meet the ships. He said the ships would be ready to perform evacuations and humanitarian relief.

Mr. Gates wouldn't specify the other military options he has offered President Barack Obama. But he sounded a note of caution about sending U.S. assets into Libya. "We have to think about the use of the U.S. military in another country in the Middle East," Mr. Gates said. "We are sensitive about all these things." 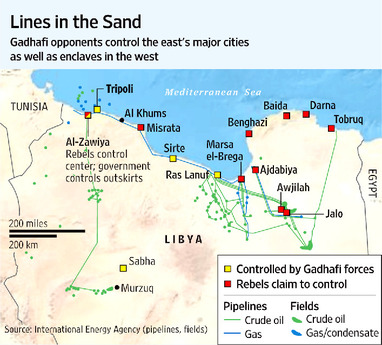 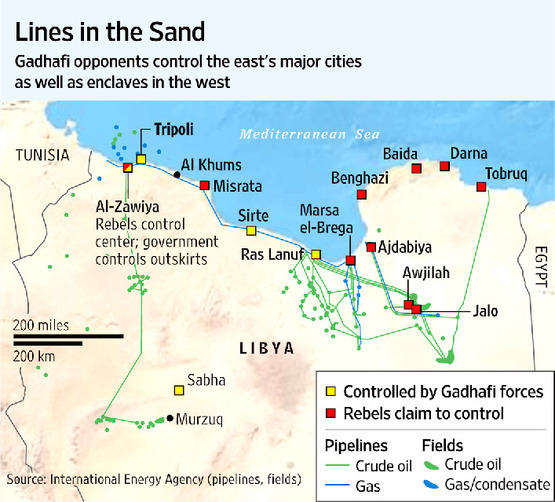 Libya's opposition is increasingly seeking U.S. military support to push out Col. Gadhafi. Libyan dissidents held meetings with the State Department in Washington this week in which they called for greater logistical support from U.S. and NATO forces, and possibly targeted military strikes on against Col. Gadhafi's air force, tanks and troops.

"We're worried this conflict could drag on," said Ali Rishi, among the dissidents who met with the State Department this week. "We don't want Gadhafi to feel he can survive."

A senior State Department official confirmed the U.S. has met with a variety of Libyan opposition figures this week but wouldn't discuss the details. "There were a variety of views expressed," he said.

The U.S. has said it wouldn't rule out any steps to ensure Col. Gadhafi exits power, as the White House and international community continue to exert pressure. The United Nations General Assembly on Tuesday suspended Libya from the U.N. Human Rights Council over the violent crackdown on protesters. 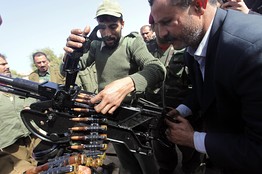 A Libyan civilian trained on using an anti-aircraft cannon in Benghazi Tuesday. 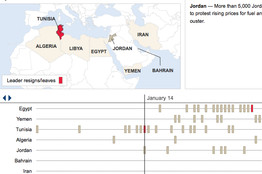 On Tuesday, Secretary of State Hillary Clinton told Congress that Libya risks falling into "civil war" unless the international community offers a more coordinated response to the bloodshed there. "In the years ahead, Libya could become a peaceful democracy, or it could face protracted civil war, or it could descend into chaos," she said.

Some U.S. officials don't believe conflict will be protracted. They say Col. Gadhafi's fate is less likely to be settled by a clash on the battlefield than it is by the loyalty of the elite units defending Tripoli. If commanders from those units begin defecting, some U.S. officials believe members of the Libyan dictator's inner circle will move against him.

One senior U.S. official said as the rebellion spreads, an assassination attempt on Col. Gadhafi "seems more plausible." The official added: "The best outcome for those Libyan leaders who are defecting will be [to put] two bullets into the heads of Gadhafi and his son."

For now, the elite brigades remain "the most enthusiastically loyal" to the dictator, and neither officials in Washington nor witnesses in Libya have seen defections from the elite units, a military official in Washington said.

Inside Libya, battle lines have hardened.

Col. Gadhafi's main support resides in the western part of the country, and he retained a strong grip on Tripoli, Sabha and Sirte, his hometown. Forces loyal to Col. Gadhafi have attempted to block the advance of rebel forces based in the eastern stronghold of Benghazi, and on Sunday retook the tiny coastal town of Ras Lanuf with a handful of troops and scarcely a bullet fired, say rebel commanders.

There are, in essence, two Libyan rebellions. A rebel army has risen up in the east, led by a provisional government in Benghazi. Independent uprisings have occurred in western towns—including Misrata, Libya's third-largest city, which lies 130 miles east of Tripoli, and Al-Zawiya, 30 miles to the capital's west.

Libya's deputy foreign minister, Khalid Kaid, denied reports that the government had attacked Al-Zawiya's central square. He said talks between the government and major tribal leaders would start Wednesday in Tripoli and that the government wasn't planning any major military offensives while the talks were under way. It wasn't clear who was taking part in talks.

On Tuesday night, a convoy of pickup trucks mounted with heavy machine guns rolled out of Benghazi, horns honking. Soldiers yelled, "To Tripoli! To Tripoli!"

But the army's battle readiness is unclear. It is being cobbled together from defectors from Col. Gadhafi's army, most of whose soldiers were undertrained and poorly equipped, and from volunteers with some army training in a country where all men are compelled to serve. 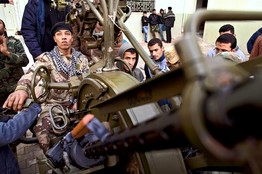 Recruits to the Libyan rebel forces learn how to use an anti-aircraft gun at a training base in Benghazi on Tuesday. 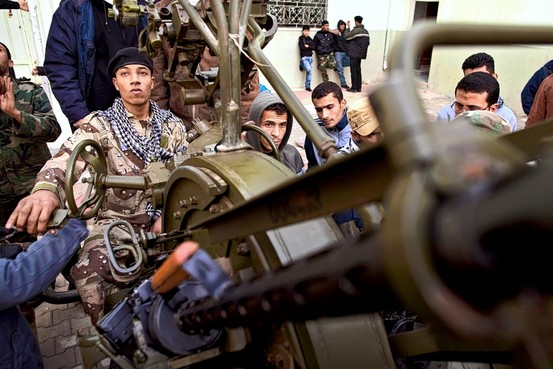 Rebel commanders pledged to move on Tripoli repeatedly in recent days, but until the convoy was seen passing through Ajdabiya no substantive force appeared to have deployed west. A municipal official in Benghazi said earlier Tuesday that hundreds of young pro-democracy rebels set off in a convoy of their own headed toward the capital after they declared they were fed up with the military's slowness to move themselves. The municipal official said rebel military units were deployed to help protect the youth convoy, not as part of a broader offensive.

Western analysts put the strength of the security force—before the civil war —at between 10,000 and 12,000 men.

The brigades occupying Tripoli have at their command 54 Russian-made tanks and 24 heavy artillery pieces, according to the retired Western military official. Witnesses in Libya said the tanks have been positioned in recent days in a defensive cordon along the southeastern outskirts of the capital.

Unlike members of the regular conscript army, who earn $450 a month, the troops in the regime-protection brigades are well-paid and equipped with modern weaponry. The units have received training from former British officers and within the last three years Khamis Gadhafi completed a commander's course in Russia, according to the retired Western official.

"The whole purpose of these forces has been to keep the leader in his capital," he said. "That's the design and the commanders are people considered the most likely to fulfill this plan." 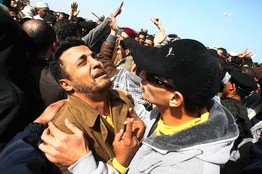 A relative of a man killed in a February clash between protesters and forces loyal to Libyan leader Moammar Gadhafi mourns at the funeral Tuesday in Benghazi. 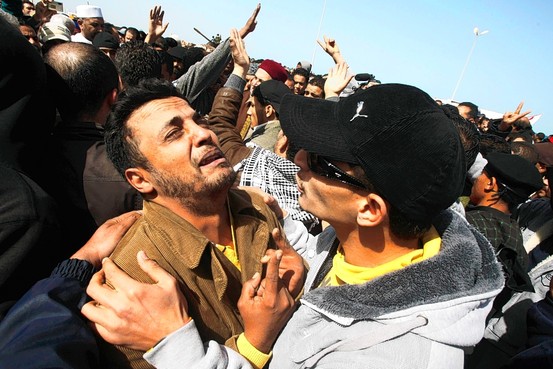 In addition to the elite brigades, paramilitary forces help secure the capital for Col. Gadhafi. A person familiar with the colonel's inner circle said loyalists from the country's revolutionary committees command many of these paramilitary forces. The committee leaders include business oligarchs who have been rewarded with lucrative state contracts as well as military political commissars.

Over the long term, the new sanctions imposed on Libya will make it difficult for Col. Gadhafi to resupply the elite units.

But current and former officials are skeptical the asset freezes and sanctions will have an immediate effect. Col. Gadhafi may be able to tap black-market sources for short-term armaments needs. Although much of his wealth overseas has been frozen, Col. Gadhafi has access to cash to pay for such purchases.

Col. Gadhafi also has long-time ties with rebels in neighboring Chad, who may be able to supply the Libyan government with arms, circumventing sanctions or a naval blockade. "With billions in cash, there is always somebody he can get something from," said Jon Alterman, director of the Middle East program at the Center for Strategic and International Studies.

—Jay Solomon in Washington contributed to this article.