Ultimate betrayal by the ultimate traitors.

The war is far from over - in fact, Libya's rebels have yet to actually take Tripoli, with entire sections of the city still being contested. Further more, entire cities, including Sirte, Bani Waled, and Libya's entire interior still stand completely under the Libyan government's control and have repelled rebels continuously over the last two weeks even with brutal NATO bombings and the expressed desire to purposefully starve their populations into submission. Despite this, the corporate media has committed to an endless mantra of "the victorious rebels" and are focused, however unrealistically, on quickly "rebuilding Libya." Not surprisingly, this "rebuilding" will be done according to Wall Street and London's designs, not those of the Libyan people. 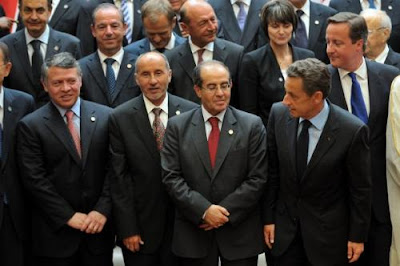 Photo: Puppets amongst puppets. Gerbril and Jalil are pictured here flanked by their European sponsors, without whom they and the contrived "National Transitional Council" would not exist. With Tripoli still contested, these two "leaders" have been making the majority of "their" dictates from Doha and Paris.

The Atlantic Council, a Fortune 500-funded think tank whose entire existence consists of perpetuating the collective interests of the global corporate-financier elite (including Shell, BP, Chevron, Exxon and a myriad of military industrial corporations), encapsulates the "coached" nature of Libya's rebuilding in an article appropriately titled, "Rebuilding Libya." In the opening sentence, it is conceded, however weaselly worded, that fighting is still ongoing in Tripoli. Additionally, the article, written by Washington insiders, also concedes that the rebels represent "only a spectrum of Cyrenaican (i.e. Eastern Libyan) interests aligned with the NATO countries."

Despite both the rebels' tenuous tactical reality and their non-existent legitimacy, coupled with now open knowledge that their fighters are led by notorious terrorists drawn from the most extreme ranks of Al Qaeda, the Atlantic Council article soldiers on claiming Libya's "immense resource wealth, small population, and ability to attract foreign investment and expertise" will help its prospects for sustainable economic growth. The article takes special care to provide advice on how Western powers can avoid appearing to be engaged in "neo-colonialism" by carefully prodding along the development of this contrived puppet regime using "carrots and sticks." The article also suggests that those serving Qaddafi's government be utilized in building up the rebels' regime to avoid a prolonged power vacuum and the accompanying instability such a vacuum engenders - instability that is already prevalent in the wake of NATO's bombs and the following onslaught of the Benghazi rebels.

Between reading the article and looking at the accompanying picture, with Libya's two arch-traitors Mahmoud Gebril and Mustafa Abdul Jalil flanked by their European sponsors, we get a concrete sense of the very real neo-colonialism taking place. The rebels appear nothing more than an ultra-violent horde of mercenaries led by an ultra-servile leadership unable to make a single decision independently without first groveling in Doha, Paris, Rome, or Washington.

Even as the very architects of the current Libyan war who have planned it literally for decades, call for an a NATO occupation force to oversee Libya's reordering, the corporate media is desperate to portray the rebels as the new independent sovereign masters of Libya. To do so, the corporate media has been publishing stories portraying the rebels as "rejecting" calls to extradite alleged Lockerbie bomber Abdelbaset Ali al-Megrahi, as well as "rejecting" the landing of UN troops, even as NATO forces fight side-by-side with them on the ground at this very moment. These PR stunts are as toothless as Egypt's Mohamed ElBaradei's threats to wage war with Israel - threats he has made even as he sits as a trustee within the US International Crisis Group alongside Israeli President Shimon Peres. These stunts are intended purely to prey upon the ignorance and emotions of the uninformed masses and lend contrived legitimacy to these puppet regimes where none exists in reality.

Quite clearly with a regime built upon such deception, with power owed entirely to the hands of foreign powers who prod them along in the shadows, nothing resembling "liberation" has been achieved in Libya. When we consider the chief promoters of this Libyan war and the subsequent "rebuilding" come from the halls of Fortune 500-funded think tanks like the Council on Foreign Relations, the Brookings Institution, and the above mentioned Atlantic Council, these suspicions are only confirmed. A horrible injustice has been committed in Libya against both the people inflicted by the hordes of rebels following NATO bombardments, as well as against young men duped into taking up the cause of their "liberation" when in reality the only "liberty" to be achieved will be that of foreign banks and corporations to operate unfettered and parasitically in yet another nation.

Beyond feckless puppet politicians like Sarkozy, Obama, and Cameron, who must also pay the price for this crime against humanity, the Atlantic Council, a policy-mill turning out endless support for these egregious crimes, conveniently provides us a list of the corporations sponsoring their activities. Below are the corporations that must be boycotted, replaced locally, and thus put out of business. We have for far too long traded in our freedom and independence to these world-spanning corporations for the empty promise of convenience. In return we have gotten nothing but scandals, theft, and war that have bled our nation dry both financially and quite literally. These are the people to blame, and you can start exacting justice today by systematically boycotting and replacing each and every one of them.

The full list can be found here, including many notorious foundations ubiquitously involved in promoting and advancing Wall Street and London's economic, social, and military hegemony over the planet.