Global Non-Compliance website > We Don't Have to Play this Game.

We Don't Have to Play this Game. 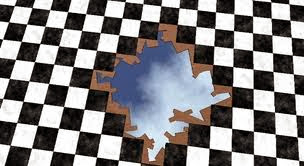 (thanks to Angela Kaye for transcribing my lecture)

We don’t need ANY of those big grubby, smelly hands moving the black and white pawns against each other,
We don’t need them.

When you are off the chessboard, you’re not living inside their mythology.

You are creating YOUR OWN mythology.

We can be the thorn in their foot…
The barnacle on the Ship of State…
Slowly eating away at the whole.

Remember – No matter what a ship is built of, it always eventually rusts.  Or rots.

And that’s how we all are.
That’s how we’re surviving.
That is A WONDERFUL THING, when you realize that !

That, when you say, “ I’m no longer at the mercy of them and their games.
I’m OFF the chessboard. “
Looking at it.  Observing it.
As a Myth.

And then, you are less likely to need the salvation from a politician (as your God).
And, what you are actually being saved from is not THEM.

When someone thinks ‘this’ or ‘that’ politician is going to “save our land” - -
No !
What he’s really doing is saving YOU from having to look at yourself !

As bad and pernicious and twisted and evil as The Psychopathic Control Grid IS,
- ultimately, it is our relationship with it, that keeps it going - .
DON’T FEED THE BEAST !

It’s a difficult world, at times, that we live in.
But, it HAS TO BE painful.
That is how evolution works.
It’s SUPPOSED to look like garbage sometimes.

They want you down there at their gibberment buildings, crybabying, “ PLEASE ! !  PLEASE !  Do something FOR us.”

That’s like saying,  “We want an investigation into the JFK assassination, and we want the guilty to be brought to trial…. To justice… “

Remember what George Carlin said,
“It’s a rigged game, and YOU’RE NOT IN IT. “

It comes from your Inner World.

Because, The Rule Book has already been written.
The Rule Book is The MonoMyth of Your Life…
In the Greater Myth of this experience we call life on earth.