Global Non-Compliance website > Who Leads the Attack On Ron Paul?

Who Leads the Attack On Ron Paul?

From the remorseless liars that brought America into the Iraq War, have kept the US mired in Afghanistan for now over a decade, oversaw the genocide in Libyawrought by NATO-backed Al Qaeda terrorists, and are attempting to incite war with both Syria and Iran, comes a frothing, if not entirely elementary attack against one of the few obstacles that stands in their way of perpetual war fought at America’s expense but for their personal gain. That obstacle is Ron Paul and the Constitutional reawakening he has spurred.

Leading the charge is a slightly misfitting addition to the Neo-Conservative corporate-fascist propaganda machine, openly-homosexual warmongering “libertarian” James Kirchick. While Kirchick’s sexual orientation really is a matter of his own personal business, the necessity of him making it a public issue and the fact that those he works for have used anti-homosexual rhetoric to manipulate the American political landscape for decades is already a display of undermining and astounding hypocrisy. 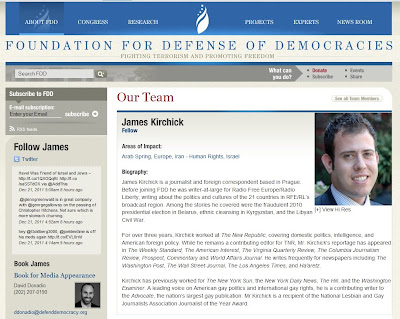 Photo: James Kirchick, of the Neo-Con corporate-fascist “Foundation for the Defense of Democracies” leads the attack on Ron Paul. Having previously worked for the US State Department funded Radio Free Europe (RFE/RL), he is no stranger to peddling propaganda.

Kirchick’s argument is based on the same tired, already addressed “newsletter” published in Ron Paul’s name decades ago, and despite none of the articles cited by Kirchick actually even being written by Ron Paul, he still enjoys preceding each accusation with, “He says…” Kirchick’s servile obedience to the Neo-Con agenda, which has cultivated and is directing Ron Paul’s competition - Cain, Romney, Perry, and Gingrich – is fairly obvious to detect. However, it is now a matter of record that Kirchick literally sits, as a “fellow” within a Neo-Con corporate and US State Department-funded think-tank, the Foundation for the Defense of Democracies (FDD).

The FDD features as its “executive team,” the likes of James Woolsey and Clifford May while its “leadership council” includes Paula Dobriansky, Steve Forbes, Max Kampelman, Bill Kristol, and Senator Joseph Lieberman. Richard Perle, Eric Cantor, Gary Bauer, and Charles Krauthammer sit on the FDD’s “board of advisors,” while Reuel Marc Gerecht, Bill Roggio, and James Kirchick himself sit as FDD “fellows.” Truly exemplary of everything that is wrong with America, and everything Ron Paul and the ideals he promotes aim at fixing, the FDD is a weed that needs to be pulled from America’s political landscape. (For further reading regarding these names, please see “NED & Freedom House are run by Warmongering Imperialists,” “Neo-Cons for Human Rights?” and to see a good example of FDD’s contrived propaganda exposed and in action, “Neo-Con Infomercial: Iranium.”)

Of course, despite a “Democratic” president sitting in the White House, America’s foreign and domestic policy has been drawn up and carried out by corporate-fascists who hold sway over both sides of America’s political aisle. “Obama’s” military adventure in Libya, for instance, wasnot only supported by what Americans might call “Neo-Conservatives,” but the war itself was drawn up by them in the first place. This indicates an overarching agenda that transcends presidencies and the perceived political ideologies they supposedly adhere to. The necessity then, to keep puppets like Bush or Obama in place is realized, as any truly independent, principled president would expose and disrupt this long running charade.

“Ten days after 9/11, General Wesley Clark visited the Pentagon where an officer from the Joint Staff warned him of an impending attack on Iraq. After the Afghan invasion, this officer shared with Clark a document handed down from the Office of the Secretary of Defense indicating plans to attack and destroy the governments of 7 countries; Iraq, Syria, Sudan, Somalia, Iran, Lebanon and Libya. General Wesley Clark would go on to share this story in a 2007 speech given to the Commonwealth Club of California where he repeated this list.

Of course, the campaigns have already begun against each of the nations Clark listed. Iraq was invaded, decimated, and has been occupied by US troops since 2003. In 2006, Israel attempted to invade and dismantle Hezbollah in Lebanon but the conflict ended in a stalemate and an eventual Israeli withdrawal. Somalia was attacked by a proxy Ethiopian invasion force with US air support starting in 2007, but it too eventually ended in failure. A silent war has already begun within Iran, including covert military operations, the arming of terrorists, assassinations, and 2 failed US backed color revolutions. Sudan has been recently carved into two states and Syria is now being intentionally destabilized by US trained and funded activists.

And now, of course in Libya’s case, aerial bombardment by US, UK, and French warplanes has begun, while the CIA and MI6 are on the ground attempting to collapse the Qaddafi regime.

Wesley Clark would backtrack in his 2007 talk in California and recall a conversation he had in 1991 with then Undersecretary of Defense for Policy Paul Wolfowitz regarding Desert Storm. Clark was told that America’s intervention in Iraq proved that the US could use its military force and the Soviets wouldn’t stop them. Wolfowitz said the US had 5-10 years to clean up the old Soviet “client regimes” before the next super power rose up and challenged western hegemony. Clark claimed that this, along with the aftermath of 9/11 constituted a policy coup where Dick Cheney, Donald Rumsfeld, Paul Wolfowitz, and the other members of the of Project for a New American Century had hijacked US foreign policy to destabilize and turn the nations of the Middle East upside down – much the way they are now. The “Neo-Conservative” element of this current round of destabilization goes deeper than the promotion of war, as the “Neo-Cons” have uncharacteristically dedicated themselves to “human rights” and “democracy” side-by-side with the likes of George Soros and Zbigniew Brzezinski.

General Wesley Clark tells of how Middle East destabilization was planned as far back as 1991, with the destruction of Iraq, Syria, Lebanon, Sudan, Somalia, Libya, and Iran on the drawing board following the invasion of Afghanistan.

Bush campaigned on an anti-war, anti-nation building platform. Obama then pledged to roll back the agenda Bush swindled the nation into, only to then continue it in earnest. All along we have been treated to the theatrics of the corporate-owned media, with pundits on the left and right reacting in shock and surprise as these engineered events unfolded according to plan.
Despite Wolfowitz’ agenda being meted out nearly 20 years ago, the ham-fisted nature of both the operation itself in Libya and the propaganda surrounding it suggests a rushed sense of desperation on the globalists’ behalf. Wesley Clark suggested that the operation to destabilize the Middle East and Northern Africa would take 5 years, starting in 2001. Wolfowitz believed that in 1991 the operation would have taken 5-10 years. The failed FBI attack on the World Trade Center in 1993 was most likely the staged impetus to trigger the first blitzkrieg. Not only did the attacks fail to cause the catastrophic effects needed to justify such an operation, the Egyptian informant assisting the FBI had recorded his conversations with agents [which are published in the NYT] indicating that they were indeed building a bomb for extremists and providing them with real explosives as well.

1993 would have fit in perfectly to tip off Wolfowitz’ plan. Upon failing, he and his PNAC cadre would attempt to destroy the World Trade Center buildings again, this time successfully on September 11, 2001. The catastrophic loss of life, the confusion, and the rage that was left in its wake gave the PNAC what they called a “new Pearl Harbor” they claimed they needed in their September 2000 report titled “Rebuilding America’s Defenses.”

These men, who in fact helped create Al Qaeda in the mountains of Afghanistan to face the Soviets in the 80s would call on their legion of foreign mercenaries to wreck havoc across the planet, heralding globalist intervention along the way. Certainly this had nothing to do with defending America or spreading “democracy” but rather bolstering the hegemony of the corporate-financier oligarchy that both the PNAC cadre and the bankers who thoroughly saturate Obama’s administration constitute.

What appears to have happened is a costly delay in 1993 and a post-9/11 campaign that has dragged on 5 years longer than expected. With the same clumsy hands fumbling in Libya also trying to stab simultaneously at both Moscow and Beijing with their agenda laid on the table openly for all to see, failure on the globalists’ behalf now may incur a wrathful response from a planet about to truly awaken.

It should be expected that that any excuse to complete regime change in Libya will be made, including creating the conditions necessary to put troops on the ground – be it because of a failing rebellion, a false flag attack carried out in Qaddafi’s name, or even feigned fears the globalists’ own Al Qaeda might “seize” Libya should they not intervene. Similarly, with the US openly admitting to funding subversive activities across the Arab world, in Iran, and even as far as China, the globalists have painted themselves into an irredeemable, inescapable corner of confrontation.”

For those interested in reading the recycled propaganda oafishly wielded by Kirchick for his politically motivated attack, read his latest article, “The Company Ron Paul Keeps.” However, now, readers should have a better appreciation of the company “Kirchick keeps,” the fact that they have done more to send misled American and Israeli troops to their needless deaths than all of Ron Paul’s non-existent “antisemitism” combined, and that Kirchick’s campaign to slander Ron Paul is built on a foundation of fear and self-preservation, not genuine concerns based on a real threat. Kirchick and the “company he keeps” are also wary of an American awakening stoked by the real issues Ron Paul brings to debates – one that isn’t swayed by left or right puppets but instead focuses on the corporate-financier puppet masters to whom all the strings lead.

While Kirchick and company labor under the delusion that Americans stand behind the endless war profiteering carried out by his peers throughout the FDD, its doppelganger the Foreign Policy Institute (FPI), and other corporate-financier driven think-tanks and US taxpayers endlessly funding the purposefully abusive Israeli military, in reality the fact that the US government, as well as the Israeli government have been pursuing the interests of Wall Street and London at the expense of both the American and Israeli people is gaining mainstream traction. Wishing the awakening away will not work.

At this point, now more than ever, instead of being caught up in the minutia of Kirchick’s recycled attacks, we must continue to point out the corporate-financier interests that truly drive America’s agenda, boycott these interests, and replace them entirely with local, pragmatic solutions.

Tony Cartalucci is the writer and editor at Land Destroyer Report